Edge of the Abyss, The 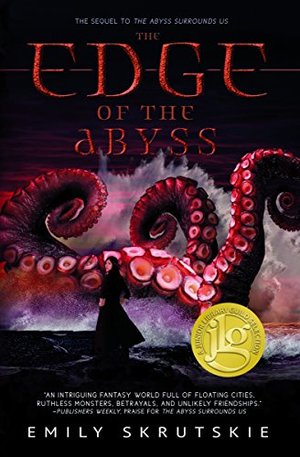 Emily Skrutskie
Three weeks have passed since Cassandra Leung pledged her allegiance to ruthless pirate-queen Santa Elena and set free Bao, the sea monster Reckoner she'd been forced to train. The days as a pirate trainee are long and grueling, but it's not the physical pain that Cas dreads most. It's being forced to work with Swift, the pirate girl who broke her heart. But Cas has even bigger problems when she discovers Boa is not the only a monster swimming free. Other Reckoners illegally sold to pirates have escaped their captors and are taking the NeoPacific by storm, attacking ships at random and ruining the ocean ecosystem. As a Reckoner trainer, Cas might be the only one who can stop them. But how can she take up arms against the creatures she used to care for and protect? Will Cas embrace the murky morals that life as a pirate brings or perish in the dark waters of the NeoPacific? The exciting sequel to The Abyss Surrounds Us

@ruthsic
Reviewed: 2018-01-25
The Abyss Surrounds Us ended with Cas turning her back on her shore life and joining up with the pirate crew of Santa Elena. At the start of this one, she starts having buyer's remorse over her decision to change the trajectory of her life. Once dedicated to protecting the seas from pirates, she is herself one now - a position that leaves her feeling guilty and sad. Guilty because of the lives she took to protect the one she loves, and sad because she has wholly given up on her future as a Reckoner trainer. And her relationship with Swift is on the rocks since a major reveal at the end of TASU, of the latter being complicit in the death of Durga, the Reckoner Cas had known from childhood. Moreover, she can't go back to her old life now because of the things she has done and the fear of facing her family with that.

But amidst this life that Cas has sought, so that she can gather proof (I'll come back to that in a bit), a crisis arises in the form of rogue Reckoners out in the sea, released by pirates who didn't know how to train them. Since Reckoners are genetically engineered, their populations are strictly regulated so as not to harm the ecosystem, but these free Reckoners, with no trainers to control them, are a danger to the fragile balance of life in the Neo Pacific. Now, Cas has to figure out a way to get rid of these Reckoners, some of which are starting to attack ships unprovoked.

The plotline of this novel was a bit of a disappointment compared to TASU. Mainly because I didn't agree with Cas' decision to join the pirates in the end of the last one, as it really doesn't make sense from the point of gathering evidence. She would have had much better luck back in her town, and besides it is not something she even pursues atop the Minnow. In the first half of the book, I couldn't even get why Cas decided to hang around, especially because she hates being a pirate. She doesn't have a clear motive for being there, and this arc exists only to keep the romantic couple within reach of each other. And then later on, towards the end, when they are all gathering for the big showdown, Cas could have easily asked for help from the shore cities, considering they do have Reckoners that she needed to take down the Hellbeasts. Don't get me wrong, the action and final battle scenes were thrilling, but it felt like an unnecessary arc when there was a much easier solution. Ecosystem takes priority over personal guilt, yo.

Besides the obvious plot holes, the book is otherwise pretty good. I loved the different natures of relationships explored in the book -the hate-respect she has for the Captain, her feelings of resentment and love towards Swift, even her grudging friendship with Varma and Chuck - they all are given importance. And the writing is quite good - expending enough detail over the Reckoners and the action scenes, and still keeping a good pace. Overall, though I loved the way the book was written and the style, I felt the plot ought to have been better planned. Even so, as a finale, it gave a good resolution to the story and had a nice ending.