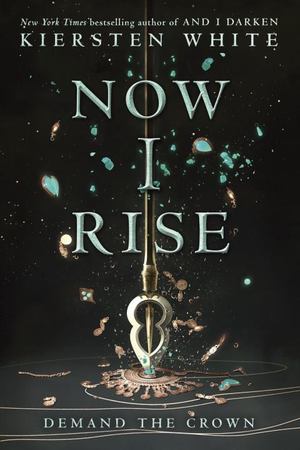 Kiersten White
The highly anticipated, mind-blowing sequel to Kiersten White's New York Times bestseller, AND I DARKEN--the series that reads like HBO's Game of Thrones . . . if it were set in the Ottoman Empire. Fans of Victoria Aveyard's THE RED QUEEN and Sabaa Tahir's A TORCH AGAINST THE NIGHT won't want to miss this riveting and gorgeously written novel--the second in the And I Darken series.  Lada Dracul has no allies. No throne. All she has is what she's always had: herself. After failing to secure the Wallachian throne, Lada is out to punish anyone who dares to cross her blood-strewn path. Filled with a white-hot rage, she storms the countryside with her men, accompanied by her childhood friend Bogdan, terrorizing the land. But brute force isn't getting Lada what she wants. And thinking of Mehmed brings little comfort to her thorny heart. There's no time to wonder whether he still thinks about her, even loves her. She left him before he could leave her.   What Lada needs is her younger brother Radu's subtlety and skill. But Mehmed has sent him to Constantinople--and it's no diplomatic mission. Mehmed wants control of the city, and Radu has earned an unwanted place as a double-crossing spy behind enemy lines Radu longs for his sister's fierce confidence--but for the first time in his life, he rejects her unexpected plea for help. Torn between loyalties to faith, to the Ottomans, and to Mehmed, he knows he owes Lada nothing. If she dies, he could never forgive himself--but if he fails in Constantinople, will Mehmed ever forgive him?   As nations fall around them, the Dracul siblings must decide: what will they sacrifice to fulfill their destinies? Empires will topple, thrones will be won . . . and souls will be lost. ★ "Gorgeous, rich, and rewarding."--Booklist, starred review ★ "Absolutely devastating in the best way."--Kirkus, starred review Praise for And I Darken   "A dark jewel of a story, one that gleams with fierce, cunning characters--absolutely riveting." --Alexandra Bracken, #1 New York Times bestselling author of Passenger   "A dark, gritty, and seriously badass epic that will have you dying for more . . . required reading for every feminist fantasy fan." --BuzzFeed   "Evocative . . . this book takes no prisoners." --NPR

“Deal enough death elsewhere to keep it away from your own home.” This is the advice that Lada chooses to hold onto after losing the chance to take over and become the head of the Wallachian empire. Lada becomes a true dealer of death, terrorizing the countryside while she desperately tries to come to terms with the fact that the only power she can rely on is her own. She leaves behind  a bloody, burned, broken path of destruction as she edges closer to what she desires. She partners with whoever brings her closer to her goals, even old enemies she never expected to respect. Lada is a firecracker, bold, brave, and ready to take what she wants. On the other side of the coin, Lada’s younger brother Radu lives a seemingly quiet life, steadfastly loyal to his Sultan. Radu struggles to understand himself and his role by the side of Sultan and longtime friend, Mehmed, and after being sent to the center of Constantinople as a double agent in the plot for the Ottomans to take the city, Radu must decide what he is willing to give up in order to help Mehmed. He refuses to aid his sister on her path, despite knowing that he could never overcome the guilt if she were to get hurt. He continues to focus on supporting the Ottoman empire and Mehmed, the man he loves, losing pieces of himself in the process. The third person narrative switches between Lada and Radu. Intricate, gripping, and fast-paced, the second book in the Conqueror’s Saga, Now I Rise, is a thrilling read for fans of historical fiction and fantasy. Submitted by: Katherine Kester

@ruthsic
Reviewed: 2018-01-25
Remember my review of And I Darken, and how I had given it only 4 stars despite liking the book so much? I was saving that fifth star for this one, because Now I Rise blew away any doubts I had in this series. I had never mentioned it in that review, but a part of my reasons for not wholly loving that book was that I wasn't sure if Lada rejecting her femininity in that one made the gender-bent retelling that effective. And of course, on Radu's side, I was disappointed that he was so blind about his feelings that he chose love over family. I needed convincing that there would be much more character development and this book delivered.

Now I Rise is of epic proportions, both in the size of the book and the amount of plot developments and character arcs in the book. While the story still continues in the alternate POV chapter style with Lada and Radu, we now see two different stories playing out. Lada is heading over to Wallachia's capital to claim the throne for herself, and declare herself Prince. In Edirne, Radu is Mehmed's silent right-hand man, who is still devotedly in love with him and his cause. Mehmed has set his eyes on Constantinople and much of Radu's story arc in this book concerns the fall of Constantinople in the hands of the Ottoman empire. (I do not consider this a spoiler, because historical fiction).

Lada's main story arc in this book is finding out how far she will go to get Wallachia - how many people (that are not of her homeland) she will readily betray to achieve the title of Prince. Her motivation, while can be seen as a thirst of power, is more patriotic in nature. She does not want to see her country suffer at the hands of others, and wants to fix it. But you know what they say about roads leading to hell. She makes an unlikely alliance with a man she thought she hated, and grows to respect him. She kills innocents in her path to clear the way to her goal. What I am saying is, she is a morally grey anti-hero, who in history has been immortalized as a villain. So yeah, her development and the way she interacts with the people closest to her are not exactly healthy. Still, she has her loyal Janissary force, and most of all, Bogdan who is in love with her (and she knows it) and would do anything for her. (*weeps for the parallel between Bogdan and Radu*) Furthermore, even though she rejects her femininity (mostly because it is a disadvantage to her),

it is not like she wants to be a man either. She gets further infuriated when everyone who meets her only sees her as an object to marry to get power, a vision that they soon regret when she dispels it with the masterful use of her knife. All she wants is to be treated as equal as any man, and in that there lies the feminism of her cause. She is cruel, yes, (I mean, she just kills anyone who doesn't agree with her) but she is also kind to those who deserve it, and my goodness, she is wonderfully complex and I am a little scared knowing what is to happen to her story.

Radu, meanwhile, has a pretty significant story arc in this book. His belief in Mehmed's cause and his love are challenged when he is sent as a spy to Constantinople. Earlier seeing everything as a political machination which served the cause, as evidenced by this line

he soon begin to learn that some prices are too much to bear. His stay in Constantinople, seeing the horrors and brutality of war and conquest with his own eyes, he starts to realize what the kingdom of men will do. He starts having doubts about his mission, on whose side he is really on and who deserves his loyalty and the city of Constantinople. He fights as much for Constantinople as he does against it, and ultimately he realizes how the people are the one who lose in war between kings. His faith in his religion is unwavering, but his love for Mehmed gets shaken by the things he goes through.

I cannot mention Radu's arc while also mentioning Nazira. She is the best wife friend Radu could have, and honestly have a more healthy relationship than most of the romantic ones in this book. Their continued love and support for each other is truly beautiful, and the best part of the book. She becomes a confidant and ally for him, and is the best partner a novice spy could hope for!

“Sweet Radu, you deserve the greatest love the world has ever seen. But I do not think Mehmed is capable of loving anyone the way you love him.”

Nazira is truly devious when needed (I love her so much!) and loving and caring. Even though she is a secondary character, she shines in this book. Her relationship with Fatima also provides the one shining hope in this book (White has promised the lesbians will have a happy ending in this series). Along with Radu, she also starts to have reservations about what all they are doing to undermine the city, she also recognizes that in a war between religions she knows who she wants to win.

The political landscape of The Conqueror's Saga is very much defined by the religious fervor and causes on both sides, and this book especially brings it out well. The expansion of the Ottoman empire by Mehmed is to consolidate the Muslim power and to dissuade any further Christian crusades on his people. But his particular drive is also fueled by the conviction that it is his destiny to do so. Meanwhile, Lada, who in the first half of the And I Darken, was more about how she had to keep Wallachia as one stronghold of Christanity, mostly abandons that narrative in favor of the more better cause of protection of her people from greedy nobles and external forces. Ultimately though, all three main characters (yes, Mehmed is a pretty major character) are morally ambiguous and when placed on opposite sides, it will be difficult for us readers to choose (please don't make us choose!)

On a technical aspect, the book is pretty lengthy, yes, but I wasn't bored for even a single page. Even with Lada's mostly constant arc of moving towards the throne, this novel was an engaging creature. It is written with skill, and I can't even begin to get into how much parallels the author draws between the characters or how she contrasts Lada's and Radu's arcs. There is still sass delivered at some points in the book, so humor is still an element in play. And underlying it, I love the fact that White went out of her way to insert marginalized characters into this story - like Fatima and Nazira, Cyprian, and also the outspoken engineer Urbana (the historical character was a man called Orban).

In all, a wonderfully crafted sequel that went beyond expectations and delivered an epic story that has me fearing and craving the third book.