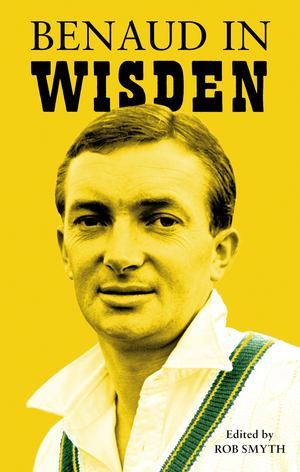 Rob Smyth (Editor)
Richie Benaud, who died this year at age eighty-four, was "perhaps the most influential cricketer and cricket personality since the Second World War," according to Gideon Haigh, the world's best cricket historian. Benaud excelled as a batsman, leg-spin bowler, revolutionary captain, and most of all as a commentator in England and Australia for almost fifty years. He was universally loved for his authority, knowledge, dry wit, and generosity of spirit. Benaud in Wisden records the highlights of an exceptional career of both a player and a journalist. Included are edited reports on each of his sixty-three Test matches, including the legendary Tied Test of 1960-61 and the match at Old Trafford in 1961, when Benaud memorably stole the Ashes from England. "If one player, more than any other, has deserved the goodwill of cricket for lifting the game out of the doldrums, that man is Richard Benaud," saidWisden in 1962. The book also includes a series of articles written by Benaud in theWisden Almanack after his retirement, as well as features fromWisden Cricket Monthly,The Wisden Cricketer, andWisden Asia Cricket. Benaud's impact was so great, and so enduring, that the book will appeal to teenagers, nonagenarians, and everybody in between. It is the definitive record of a unique career.