Magicians: A Novel, The 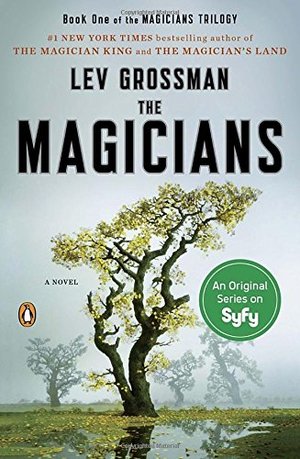 Lev Grossman
The New York Times bestselling novel about a young man practicing magic in the real world  Like everyone else, precocious high school senior Quentin Coldwater assumes that magic isn't real, until he finds himself admitted to a very secretive and exclusive college of magic in upstate New York. There he indulges in joys of college-friendship, love, sex, and booze- and receives a rigorous education in modern sorcery. But magic doesn't bring the happiness and adventure Quentin thought it would. After graduation, he and his friends stumble upon a secret that sets them on a remarkable journey that may just fulfill Quentin's yearning. But their journey turns out to be darker and more dangerous than they'd imagined. Psychologically piercing and dazzlingly inventive, The Magicians, the prequel to the New York Times bestselling book The Magician King, is an enthralling coming-of-age tale about magic practiced in the real world-where good and evil aren't black and white, and power comes at a terrible price.

@ruthsic
Reviewed: 2018-01-25
I came by The Magicians from the show, so much of my review is going to be a little biased based on my love for the show - some things good, and some things bad, and them being compared to how they are on the show. Blanket statement - after reading this book, I love the show better, and I am at a 3.5 stars for this book (but Goodreads doesn't have half stars so I rounded up from my love for the show to a 4). I will advise discretion for alcohol abuse, drug abuse, and for mention of sexual assault.

Now, while the Magicians has mostly been said to be a Narnia meets Harry Potter kind of tale, or an adult Harry Potter, the thing is that it explores the darker side of both settings. What if Narnia wasn't the idyllic quest that it was? What if a whimsical land had it own set of problems, and the humans who get roped into those are out of their depth? What if you get your wish and go to Hogwarts, but you still aren't happy? The book superficially glides over the topic of Quentin's depression (which is better handled in the show, IMO) but it also talks about how magic, though seemingly a miracle, is not always a solution. Sometimes your problems are because of what you are, and not where you are.

The world of Brakebills and Fillory, while explained in much detail, still feels surreal when it comes from Q's POV. Perhaps it is his failing as a protagonist, but we don't get much characterization for other characters either. The story's sole focus is Q and how his journey of being a brilliant student, a talented magician and a questor doesn't ever end - he is always on the lookout for the next adventure, thinking it will fill some hole inside him. Parental neglect is slightly touched upon with regards to him, as well as Alice, his best friend and girl friend. The other characters, Penny, Eliot, Josh and Janet get more prominence from part 2 of the book - as well as the various relationships between them, and how they affect the dynamic between Q and Alice. The overall mood of the book, though is sombre, and like a downward spiral - it doesn't have much humor, and doesn't evoke much emotions on the part of the reader (or I am just too cold a person to care much).

Now, while this is about magic, the mythology of the magic itself comes across as clinical. There is no wonder as there is in Harry Potter - it is simply a tool that they study hard at, and succeed at. As my reading buddy pointed out - 'I wish there would have been more magic'. People who read the book only will perhaps be disappointed by how the magic is presented, without much description unless it is something major. It is like the book is saying - the magic? that is not important! And in some ways I agree with it - the story is not about the wonder that is magic, or the haven that is Brakebills, it is how all these kids who hit the jackpot and get to manipulate reality itself react to the powers. It is mainly about the magicians and what magic does TO THEM. Even in the case of the Beast, it is presented as the cause for his creation from what was before, though I kinda like the show's version better. (Don't blame me - I vastly prefer the show over this book, especially because how it handles some storylines better).