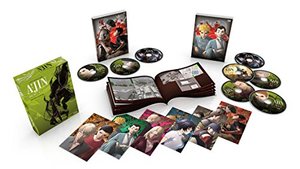 Ajin: Demi-Human Season 2 contains anime episodes 1-13 and movies "Comfort" and "Collide" all in a chipboard box that includes a booklet plus art cards.Kei's stopped running, but his decision to stand and fight comes just as Sato launches his second wave of terror. Angered by the governments' refusal to admit the truth about the live experiments on captive Ajin, the Ajin terrorist has begun assassinating a list of the key individuals connected to Ajin research, and only someone as unkillable as he is has a chance of stopping the man in the hat.With Sato being better trained, more experienced, and allied with other Ajins, Kei has only two chances at heading off the final apocalypse: to somehow learn how to better control the Invisible Black Matter being he generates or to recruit other Ajins into the battle. The shadow war explodes and the world burns as the ultimate warriors face off in immortal combat!Special Features: Clean Opening and Closing Animations