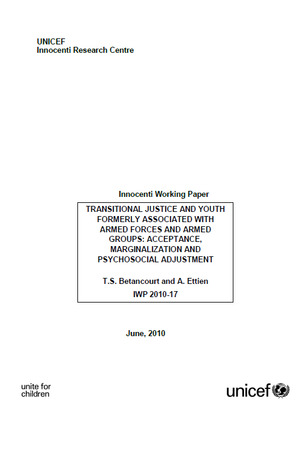 T.S. Betancourt, A. Ettien
To support true healing of war-affected populations, including children formerly associated with armed forces and armed groups, transitional justice efforts must attend to the often lasting psychosocial consequences of war in the post-conflict environment. We use key informant and focus group interviews (2002, 2004) to examine the war and post-war experiences of youth, with particular attention to the reintegration experiences of former child soldiers. We found that war-affected youth continued to struggle with a number of issues that thwart their desires and efforts to fulfil their life ambitions, including limited school access, economic instability, social isolation and stigma. Young people were better able to navigate daily stressors when endowed with individual agency and perseverance and surrounded by robust family and community supports. For more troubled youth, social services programmes and formal mental health services set up immediately after the war have not been sustained in Sierra Leone. Voluntary child welfare committees established after the war focused mainly on younger children and largely dissipated with time. Our findings support the need to adopt a broader view of transitional justice to meet the needs of war-affected children and families, particularly former child soldiers. A developmental view of the impact of war experiences on children is needed that includes advocacy for investments in social services to monitor and support healthy family and community reintegration over time. Advocacy pursued under a transitional justice agenda has a role to play in emphasizing the need not just for special courts or truth and reconciliation processes but also for the funding of social services institutions and the development of sustainable health infrastructure, thus helping post-conflict governments to deliver social services to their citizens as part of a strategy to support collective healing and secure peace.