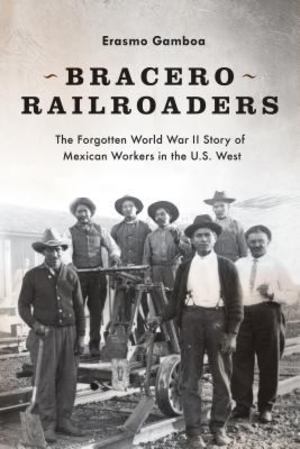 Erasmo Gamboa
Desperate for laborers to keep the trains moving during World War II, the U.S. and Mexican governments created a now mostly forgotten bracero railroad program that sent a hundred thousand Mexican workers across the border to build and maintain railroad lines throughout the United States, particularly the West. Although both governments promised the workers adequate living arrangements and fair working conditions, most bracero railroaders lived in squalor, worked dangerous jobs, and were subject to harsh racial discrimination. Making matters worse, the governments held a percentage of the workers' earnings in a savings and retirement program that supposedly would await the men on their return to Mexico. However, rampant corruption within both the railroad companies and the Mexican banks meant that most workers were unable to collect what was rightfully theirs. Historian Erasmo Gamboa recounts the difficult conditions, systemic racism, and decades-long quest for justice these men faced. The result is a pathbreaking examination that deepens our understanding of Mexican American, immigration, and labor histories in the twentieth-century U.S. West.