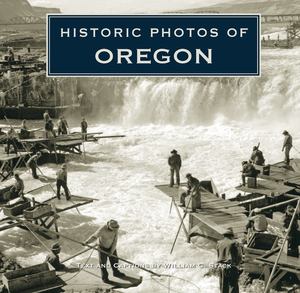 William Stack
Known for its natural beauty, Oregon has a unique and remarkable history. During the sixteenth century, European explorers sighted the Oregon coast and wrote about it. The region would be opened to settlement through the Hudson's Bay Company and later as a result of the Lewis and Clark Expedition of 1805. By 1859, the Oregon Territory was set to join the Union as the 33rd state. Over the next two centuries, the opening of navigable rivers and bays to steamships, the arrival of the railroads, and in the twentieth century the advent of roads and highways helped cities like Portland, Eugene, Salem, and Medford, as well as the state's smaller communities, grow and prosper. The pioneers and settlers who came to the region worked at logging, lumber milling, fishing, farming and ranching, mining, and salmon canning. Nearly 200 images, all published in vivid black-and-white with captions and introductions, make Historic Photographs of Oregon a compelling look at the history of this intriguing and picturesque state.