I Wish You All the Best 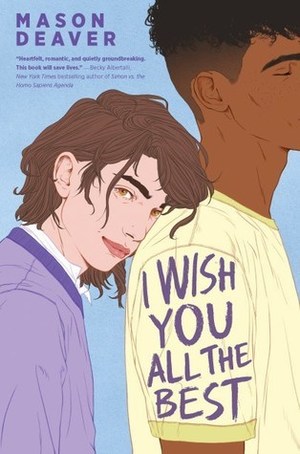 Mason Deaver
Perfect for fans of Adam Silvera and Becky Albertalli, Mason Deaver's STUNNING debut will rip your heart out before showing you how to heal from tragedy and celebrate life in the process.When Ben De Backer comes out to his parents as nonbinary, he's thrown out of their house and forced to move in with his estranged older sister, Hannah, and her husband, Thomas, whom Ben has never even met. Struggling with an anxiety disorder compounded by his parents' rejection, he comes out only to Hannah, Thomas, and his therapist and tries to keep a low profile in a new school. But Ben's attempts to survive the last half of senior year unnoticed are thwarted when Nathan Allan, a funny and charismatic student, decides to take Ben under his wing. As Ben and Nathan's friendship grows, their feelings for each other begin to change, and what started as a disastrous turn of events looks like it might just be a chance to start a happier new life.At turns heartbreaking and joyous, I Wish You All the Best is both a celebration of life, friendship, and love, and a shining example of hope in the face of adversity.

@alissee
Reviewed: 2021-12-08
This is more rambling than reviewing, and also beware of the overused italics.

I read about 10% and was already crying my eyes out. Which was unfortunate because I was reading in the office canteen.
Anyway. That beginning, it just hit you right in the feels. It was very powerful and incredibly sad.
Ben finding courage to tell their parents the truth about themselves, wanting to be understood and accepted and instead getting kicked out of the house? Into the cold without fucking shoes? What the hell is wrong with people? Of course I was crying.
And then there was Hannah, who came to get them and took them home and later - asked about their pronouns. It made me tear up all over again. Because this is such a simple thing, it shouldn't be that big of a deal in 2020, ffs. Everyone deserves to be recognized for what they are and how they identify.
And yet it is still so rare (and in my part of the world basically non-existent). This acceptance. This simple fact that people have a right to be who they are.

And this is why I think this book is really, really important. The topic it talks about, it should be out there, the more the better.

But. I just wish it was written better. Because the writing here, it's just... not that great (just like the writing of this review, lol).
There's tons of useless, pointless, on-the-nose dialogue that goes nowhere and should have been cut. There's no actual growth or real depth to any of the characters. Mostly they're either evil incarnate (the parents) or overly accepting of Ben, and by 'overly accepting' I mean those situations when Ben behaves like a little bitch (sorry) and these other characters just keep apologizing to Ben for that.

I gotta say, I kinda see the point of those scenes: this absolute, unlimited acceptance of Ben and taking the blame for all the possible shit that happened. I used to write fan fiction with a similar trope, when one character constantly feels 'wrong' and inferior and the other one keeps validating them, over and over again, telling them how important and wonderful and amazing they are.
Writing and reading this can be somewhat therapeutic, I guess, but if we're talking about an actual book and not my horrid fanfics, I'd prefer to have more substance, to have a better look into the character to connect to them and to actually understand why they react this or that way.

Just telling me they're depressed isn't gonna cut it. Just saying they're a queer teenager isn't gonna cut it.
It explains things that happen. But it doesn't make you go through it with Ben, feeling what they're feeling.
Instead it kinda leaves you with the impression that they were trying to be difficult sometimes, trying to be miserable by refusing help and affection - and it's not true. The problem is that for half of the book I had to remind myself that it wasn't true.
Item Posts
@wilohwisp2mo 25d
completed ... on 2021-11-01
@wilohwisp2mo 25d
began ... on 2021-11-01
© 2022 libib.com / All rights reserved