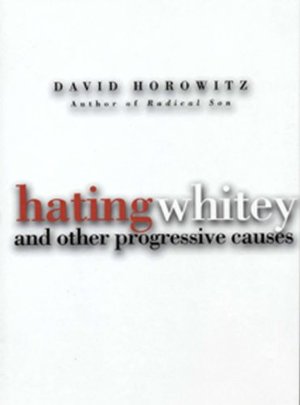 David Horowitz
In his introduction to Hating Whitey and Other Progressive Causes, former Marxist turned conservative muckraker David Horowitz insists that his views on race "have remained entirely consistent with my previous commitments and beliefs.... I believed that only government neutrality towards racial groups was compatible with the survival of a multi-ethnic society that is also democratic. I still believe that today." Horowitz has, in fact, remained remarkably consistent in attacking elite social institutions and their subtle attempts to promote what Nicholas Lemann refers to in The Big Test as a "meritocracy." While former colleagues from the '60s have come to defend the rise of progressives within the bunkers of power, Horowitz still assaults the ramparts with venomous glee; his appearances on cable TV news shows, NPR, and the Salon Web site have earned him a legion of fans. In Hating Whitey, Horowitz pummels administrators, hapless scholars, rival pundits, and embattled defenders of affirmative action and race-based quotas. But while Stephan and Abigail Thernstrom and Shelby Steele have made the case against racial preference with rigorous methodological approaches or rhetorical eloquence, Horowitz doesn't throw much new light on the issue. Even the revealing personal essays dealing with the author's ill-fated tenure with the Black Panthers in the early '70s recycle material previously covered in his autobiography Radical Son. This time around, Horowitz mostly names names and issues ideological fatwas against those with whom he disagrees, invoking the 1950s anti-Communist newsletter Red Channels at its prime. Hating Whitey may satiate the blood lust of the converted, but it's only marginally useful in the larger discussions of race relations in America. --John M. Anderson Kurzbeschreibung The anti-white racism of the Left remains one of the few taboo subjects in America. A former confidante of the Black Panthers and author of Radical Son, David Horowitz lays bare the liberal attack on "whiteness"—the latest battle in the war against American democracy. His passionate and candid account of contemporary racism reveals that the Cold War has come home. Ideological hatred of whites is now a growth industry, boosted by "civil rights" activists and liberal academics. These once-youthful radicals, now entrenched in positions of power and influence, peddle a warmed-over version of the Marxist creed that supported the communist empire and excuses intolerance to the point of thuggery. Betraying the legacy of Martin Luther King, this alliance of black civil rights leaders and white radicals threatens to undermine America's moral, political, and economic institutions. Mr. Horowitz acknowledges that America's unique political culture is the creation of white European males, primarily English and Christian. But these very men and their heirs have led the world in abolishing slavery and establishing the principles of ethnic and racial inclusion. Undeterred, so it seems, by America's Anglo-Saxon pedigree, people of every race and creed still flock by the millions to these shores for a share of our unparalleled rights and opportunities. Yet, with staggering hypocrisy, a clique of racial warlords and academic malcontents indicts our every institution for racial oppression. No stranger to ideological combat, Mr. Horowitz anticipates the standard charges of racism and sexism—wearisome bromides reflexively hurled at dissenters from the party line. Undaunted, he boldly grapples with contemporary racism in all its forms.