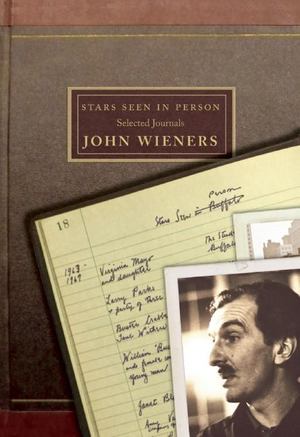 Michael Seth Stewart (Editor), Ammiel Alcalay (Preface by), John Wieners
A contributor to Donald Allen's seminalNew American Poetryanthology, John Wieners was on the periphery of many of the twentieth century's most important avant-garde poetry scenes, from Black Mountain and the Boston Renaissance to the New York School and the SF Renaissance. Having achieved cult status among poets, Wieners has also become known for the compelling nature of his journals, a mixture of early drafts of poems, prose fragments, lists, and other fascinating minutiae of the poet's imagination.Stars Seen in Person: Selected Journals of John Wienerscollects four of his previously unpublished journals from the period between 1955 and 1969. The first journal depicts a young, openly gay, self-described "would-be poet" dashing around bohemian Boston with writer and artist friends, pre-drugs and pre-fame. By the last book, decimated by repeated institutionalization (the first for drug-related psychosis, the rest the consequence of the first) and personal tragedies, Wieners is broken down and in great pain, but still writing honestly and with detail about the life he's left with. These journals capture a post-war bohemian world that no longer exists, depicted through the prism of Wieners' sense of glamour. Praise forStars Seen in Person: "Like Rimbaud inSeason in Hell, or Baudelaire withIntimate Journals, there's an unguarded spark and trust in John Wieners because impulse and imagination reign supreme. In 1955 he writes, "I shall try the only true thing I want to do. I shall go to my poems." PredatingThe Hotel Wentley Poems, moving throughAce of Pentacles, and ushering us into his life beforeNerves,Stars Seen in Person further illuminates John as our future/former best unkept secret."--Micah Ballard "Thanks to Michael Seth Stewart's editorial legerdemain, at long last we have the magnificent John Wieners here before us, in his full undressed splendor: poet, stargazer, philosopher, shaman, flâneur, survivor. His journals--an inspiring monument, filled with taut provocations and purple illuminations--are valuable as cultural history, as lyric performance, as uninhibited autobiography, and as a motley, genre-defying epitome ofgesamtkunstwerk aesthetic possibilities that seem as fresh and enticing as anything being dreamt up today."--Wayne Koestenbaum "These pages of notebooks and poetry--so exhaustively exhumed and returned to light and breath--are equivalent to Rilke'sLetters to a Young Poet, but in reverse. John Wieners (forever young) evolved through his prose notes towards a sustained poetics of adolescence, holding that tormented phase on a long unyielding band-wave, resisting the sop of adult living with all his might and undergoing the inevitable punishments that such persistence brings."--Fanny Howe "John Wieners remains one of the best poets of my generation. His work & life continue to influence younger poets. These journals reveal his deep commitment to poetry & the poem; they contextualize his constant questing & devotion to the art. I knew John during many of the periods his journals cover &, as always, remain amazed & moved by his deeply examined honesty & purity."--David Meltzer John Wienersstudied with Charles Olson at Black Mountain College, and later edited the small magazineMeasure. He lived for a year and a half in San Francisco, where he wrote his breakthrough book,Hotel Wentley Poems(1958). In the early seventies he settled into an apartment on Boston's Beacon Hill, where he lived and wrote until his death in 2002.