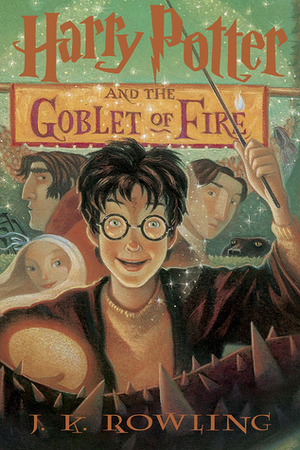 J.K. Rowling
Fourteen-year-old Harry Potter joins the Weasleys at the Quidditch World Cup, then enters his fourth year at Hogwarts Academy where he is mysteriously entered in an unusual contest that challenges his wizarding skills, friendships and character, amid signs that an old enemy is growing stronger.

Rowling’s 4th installment of her infamous ‘Harry Potter’ series has started to become more intricate than ever before. With the characters getting older, the stakes are getting even higher as the series progresses. I find Rowling’s writing to be so illuminating as she can set the scene and draw you in immediately. Rowling has a clear vision of the plot of the story, and of the series making each installment feel perfectly paced thus far.

One of the things I love about our three main characters is to see how they grow over the span of the books. Harry’s amazement of magic and all that it can do is still there, which I love because it helps the reader connect with him. I have really enjoyed Hermione’s arc as she has gotten more “political” like standing up for what she believes in! Since she is also from the muggle world, she sees how arbitrary some of the wizarding customs still are while non-muggle families may not see it.

I was also glad to see witches and wizards from other countries like at the Quidditch World Cup and with the other competitors in the Triwizard Tournament. With Rowling expanding beyond Hogwarts, it gives the world a much bigger scope and gives opportunity for areas besides Hogwarts to be explored in the future.

Rowling knows how to write cruel characters and Snape is one I really do not care for at the moment. He is cold to Harry from the very beginning of the series, but he does help him out in some ways so I have to give credit where credit is due, but he does seem to give Harry hell when he can.

Having Harry experience something he has not really experienced before was hard to read because it also took me by surprise. With Rowling’s expertise writing, I could not stop turning the page to find out what happened next! I am excited to see what book 5 holds.

So many things happened in the course of the workout that reading this book in hardcover is. I could shoulda-coulda-woulda this story and pick it apart, but why? The story is excellent and while it once again paints Harry as some infallible hero, which should be expected, it does give us more of the supporting cast...although Diggory seemed more like a device, than a fully realised character.

While I do like the books so far, I can't say I'm a true fan - I may actually never become one, as I typically don't pass into fandom; it's a bit sad as it feels like I'm missing out on a part of the story by not embracing it fully...I have yet to look up a recipe for butterbeer, or order DVD copies of the movies, or any HP paraphernalia...but maybe that'll come later.

It's so well done though that I felt that reading the next book was a must.