Anatomy of the Quran 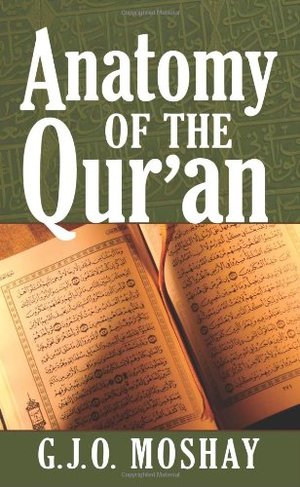 G J O Moshay
The Muslim Students Association at the University of California says on their website: "Prophet Muhammad (saas) was the final Messenger of Allah to humanity, and therefore the Qur'an is the last Message which Allah has sent to us. Its predecessors such as the Torah, Psalms, and Gospels have all been superseded. It is an obligation — and blessing — for all who hear of the Qur'an and Islam to investigate it and evaluate it for themselves. Allah has guaranteed that He will protect the Qur'an from human tampering, and today's readers can find exact copies of it all over the world. The Qur'an of today is the same as the Qur'an revealed to Muhammad (saas)." (Emphasis mine).Are Muslims ready for such an investigation and evaluation of the Qur'an? It is a challenge we must take up.Author G.J.O. Moshay approaches this investigation with level-headed gentleness, but nonetheless holds nothing back. He shows that the Qur'an does not stand up under such scrutiny. His logic is both quiet and irresistible. He quotes what the Qur an says about itself, and then asks questions that simply cannot be answered.He goes on to list many of the surprising contradictions found in the Qur'an. He shows how the Qur an claims that Allah can say one thing today, and then change it tomorrow. Is Allah error free? Of interest are the statements in the Qur'an which clearly connect people who even secular history reveal lived over 1,000 years apart.Make no doubt: Moshay is writing from a Christian perspective. What makes him unique is his in-depth knowledge of the Qur'an and its problems.