Age of Consent: A Manifesto for a New World Order, The 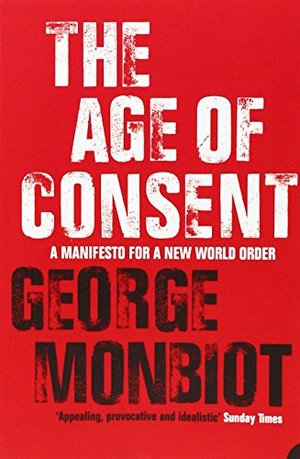 George Monbiot
George Monbiot's reputation as a campaigning journalist and proponent of social justice makes The Age of Consent a fascinating prospect. And so it proves. It is nothing less than what its subtitle calls a manifesto for a new world order, a proposal to change the way everything works. This is aiming very high indeed. Monbiot is interested in the global mechanisms that control war, peace, trade and development, and his manifesto explores the practical means by which the control of these mechanisms can be removed from the hands of the unelected rich and put into those of truly representative democratic bodies. (Many campaigners within what he calls "our movement" will be disconcerted by the briskness with which he dismisses the parallel options of anarchism and doctrinaire Marxism as useless to his purposes, concluding that a democratically elected World Parliament is the only possible solution.) Corporations figure largely in his arguments, as you might expect, but Monbiot's analysis of their current and possible future role in a reformed world system is more nuanced than some offered by his anti-globalisation cohorts. He recognises that global trade is a necessity and that global corporations are best placed to carry this out, but only if they are properly policed, their ability to "externalise" (i.e., dump on someone else) hidden costs, such as environmental damage, rigorously controlled. As Monbiot vividly remarks, a corporation is merely a tool. When it starts demanding, or usurping, the rights of a person, it must be destroyed. This is thought-provoking stuff. So too is his account of the creation of the World Bank and the IMF in 1944. Above all, The Age of Consent is a call to action: all its research and analysis will amount to nothing, says Monbiot, if it doesn't contribute to the process of change for which he sees a vast global will developing. He genuinely believes, and communicates strongly his belief, that the monolithic political and economic forms that constrain the poor world to its subordinate position can be changed, and offers suggestive and practical ways in which this might be achieved by direct and indirect action. Most powerful among weapons to bring about the transformation of the world is the belief in the effectiveness of collective action. This is fighting talk, powerfully delivered. --Robin Davidson