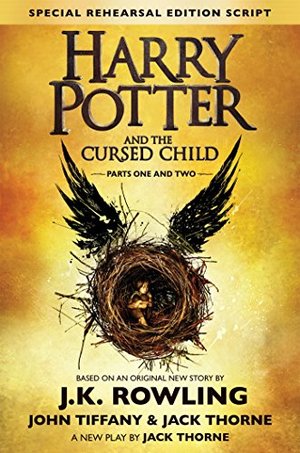 @gbshe
Reviewed: 2019-11-30
Scholastic Incorporated
@zairhazerdane1
Reviewed: 2019-07-14
Audiobook - would’ve been a good book if it weren’t a sequel to the Harry Potter series. The characters are so out of their characters 98% of the time. The story’s not bad but just the way the characters are acting is what fuels me! Harry Potter being disrespectful and threatening Minerva? You’re kidding. Worst HP sequel book.
@slevasse97
Reviewed: 2019-07-04
Okay...who the heck thought that this book was a good idea??? I mean, it is a good idea. As a huge Harry Potter fan, I would love a sequel to the series, but this is most definitely not what I would have in mind. I didn’t like that it was done exclusively as a play. I think that’s a huge part of why I didn’t like it. It’s also just so confusing. All the hat between Draco and Harry (honestly, I thought that crap was resolved). And the drama with Harry and his son (nope, not having it). I don’t even know what else to say about this book. None of the original characters even seemed the same. I get they’re older adults now, but I didn’t feel that the personalities of any of them were there. It was like they were all completely different people. The plot was terrible and the writing style (minus the fact it was a play) made it seem like it was written for little kids. It makes me sad to do this, but 2 stars is all this book will get from me.
@woodsangel
Reviewed: 2019-06-17
Not at all what I was expecting, which is sometimes a good thing when delving into one of your favorite book series. I thoroughly enjoyed Albus and Scorpius' friendship the most. Not as spectacular or willing to hold my attention like the originals but enough to keep my Harry Potter addiction in check.
@OlliesAddiction
Reviewed: 2016-08-09

Omg. I never thought I'd get to experience the glorious rush of another Harry Potter book like the series, but man, I experienced it. I would've loved a novelization, but honestly, I felt like the script allowed me to use my imagination a bit more wildly. Also, I'm just happy and grateful that J.K. Rowling graced us with this story so soon instead of me having to wait another year or two for a novelization. I'm in love!