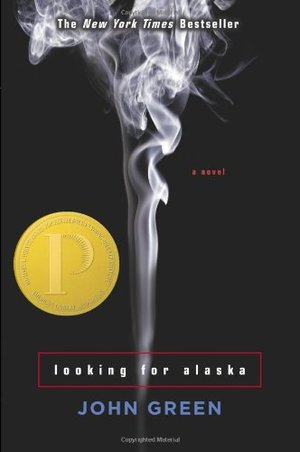 John Green
The award-winning, genre-defining debut from #1 bestselling author of The Fault in Our Stars Winner of the Michael L. Printz Award Los Angeles Times Book Prize Finalist New York Times bestseller Before. Miles Pudge” Halter is done with his safe life at home. His whole life has been one big non-event, and his obsession with famous last words has only made him crave the Great Perhaps” even more (Francois Rabelais, poet). He heads off to the sometimes crazy and anything-but-boring world of Culver Creek Boarding School, and his life becomes the opposite of safe. Because down the hall is Alaska Young. The gorgeous, clever, funny, sexy, self-destructive, screwed up, and utterly fascinating Alaska Young. She is an event unto herself. She pulls Pudge into her world, launches him into the Great Perhaps, and steals his heart. Then. . . . After. Nothing is ever the same.

@ginadavidson
Reviewed: 2018-07-18
Great characters that made me think about some deep stuff…and im still thinking haha
@zairhazerdane1
Reviewed: 2018-04-05
It was...enigmatic. I decided reading it thinking its going to be a light read but damn was i wrong. I felt the heart clutching pain. But if im being completely honest, it started out weak, nothing significant really is happening. Aside from the shocking secrets they’ve shared on the barn and when they went to the Colonel’s trailer-house. The only significant thing that happened is what happened to them after Alaska died. I kinda saw it coming but it still surprised me nonetheless. It was very emotional but looking at it in a different perspective, there is very little lesson you can get from it compared to the other books.
@bookaddictguide
Reviewed: 2017-12-07
Initial Impressions 9/2/17: 3 - 3.5 stars
LOOKING FOR ALASKA is one of the better John Green books I've read (the first being WILL GRAYSON, WILL GRAYSON) but I just still don't love John Green's writing. Actually, mostly I don't like his characters. Don't hate me buuuut.... Alaska bothered me. Heck, she even bothered her friends. It was another character who was idealized despite her flaws, which I guess happens all the time in books, but there's just something about the way it all happens in John Green's writing that I don't like. I went into this with an open mind and still had a hard time with his characters.

That being said, I did still enjoy it! It wasn't amazing and didn't make me feel all the feels but it was an interesting story and I actually enjoyed every other character except for Alaska, which was the whole point of the book.

The "After" didn't kick me in the feels like I knew it was supposed to (I figured it would be something like that but still didn't know what was coming) and it felt a little anti-climactic. I'm glad that it read it but it wasn't a stand-out read for me and while I didn't find anything "wrong" with it, it just wasn't a book that I really connected to. I'm glad my curiosity was satiated and that I still know my feelings about John Green's books despite continuing to try them. It's like... I'm happy that I keep picking them up but they're still not impressive to me.

Overall, this story did have more relatable characters than most and felt like one of the least pretentious books so that was a good experience! Still the black sheep on so many things, as always, but I'm okay with that.
@kelliannekc
Reviewed: 2017-07-10

The end of this book murdered my heart. I don't know what I was expecting.

@spirit0
Reviewed: 2017-01-29
This was my first John Green book, so maybe I went into it expecting too much after all the hype he's received.

First, the main female protagonist, Alaska, epitomizes the "girls must act weird and have big tits to be likable" fad. Even though she ended up not being so.

The portrayal of all high school students as smokers and drinkers, because hey, once you get peer pressured, all your moral qualms are gone, also seemed unrealistic. Consistently in young adult literature, high school is portrayed as a cesspool of douchebagery, and if you're not a douchebag in some way, you have no friends (which is exactly how many friends the main character, Pudge, had in public school before going to boarding school). I can't suspend my disbelief when Pudge became a completely different person when he meets new people at his boarding school. His character development was poor, and he was a poor character.

Most of the other characters, though full of (hipster) humor, are mostly not memorable or honorable. Lara, one of the side characters, seemed particularly superfluous. Her blow-job romp with Pudgy-wudgy had no place.

I'm not sure why this YA book stands above the rest and deserved an award. Is it because it's open-ended? Because it doesn't try to hit you over the head with a moral? Because the lack of preaching does not make it profound.

This book is written in two parts, before and after. The before section is uncharacteristically slow for a John Green novel. The connection between the two main characters, Pudge and Alaska isn't truly felt by the reader, however, part of this is deliberate due to the fact that Alaska is unavailable - she has a boyfriend. My favorite part of the book was the theme of the "Great Perhaps" and the main character's interest in last words. This thread was woven well through out the book. It was however, difficult to follow the different characters and the ways the connected and didn't connect. Many of the interactions in the beginning felt very surface level and like Pudge was reacting more than he was acting. The book picked up in the second half as Pudge becomes more confident in his identity.

What I did like: Chip, for the most part. His character stayed true throughout. The religion class, and the religion teacher. The ending, and the ending final paper. The character growth.

What I didn't like. Alaska. Trying too hard, she never rang true to me. I almost broke something with the ferocity of my eye-rolling. Miles at the beginning, although he grew on my by the end. The potential to really explore the issues presented, but the book skated where it could have gone deeper. But hey, it was his first book, so I gave it the extra star.