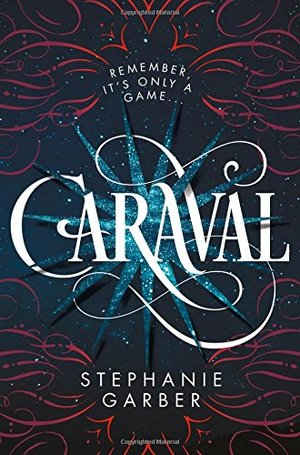 Stephanie Garber
Whatever you've heard about Caraval, it doesn't compare to the reality. It's more than just a game or a performance. It's the closest you'll ever find to magic in this world . . . Scarlett has never left the tiny island where she and her beloved sister, Tella, live with their powerful, and cruel, father. Now Scarlett’s father has arranged a marriage for her, and Scarlett thinks her dreams of seeing Caraval, the far-away, once-a-year performance where the audience participates in the show, are over.But this year, Scarlett’s long-dreamt of invitation finally arrives. With the help of a mysterious sailor, Tella whisks Scarlett away to the show. Only, as soon as they arrive, Tella is kidnapped by Caraval’s mastermind organizer, Legend. It turns out that this season’s Caraval revolves around Tella, and whoever finds her first is the winner.Scarlett has been told that everything that happens during Caraval is only an elaborate performance. But she nevertheless becomes enmeshed in a game of love, heartbreak, and magic with the other players in the game. And whether Caraval is real or not, she must find Tella before the five nights of the game are over, a dangerous domino effect of consequences is set off, and her sister disappears forever.Welcome, welcome to Caraval . . . beware of getting swept too far away.

@bibliophilebrit
Reviewed: 2021-07-12
I absolutely have to give this book five stars because nothing was as it seemed. It was perfect. Even after being warned by the characters, I still fell for the plot points. Wonderfully done!
@amslatis
Reviewed: 2021-07-05
This one was a major disappointment -- certainly not enough time was spent on the world building in terms of where/when this is taking place, where is the context for the world? The history of the game? Interview with author suggests that with every draft she kept trying to up the ante or add in extra details -- maybe why so much of it felt superfluous. Think West World meets the Night Circus. There were so. many. twists. that none of them felt that important or held weight.
@kirbyb
Reviewed: 2021-02-04
3.95
@katewilburn404
Reviewed: 2020-11-04
The characters, the setting, the drama, the plot twists. I loved this book! The love magic in any form, but this was unlike anything I have ever read! Magic in only during this one game, almost like a travelling show, but a city full of Alice in Wonderland type happenings. I clearly cannot describe it properly, you should just read it!
@aeshley13
Reviewed: 2019-11-11
I absolutely love Scarlett’s character and how she grew. I adore Julian and he deserves the best. Such a magical book and world. Love everything about this booo!
@empresssupreme
Reviewed: 2019-10-27

This book was so amazing. I heard that it was artful and all, but I didn't expect it to be SO FREAKING BEAUTIFUL! The detail that was put in was amazing, and that's not even getting into how creative the storyline was. In order to get through this, I'm going to do what I've always wanted to do with a book review and break it down.

The writing itself
I already kind of said this, but it was beautiful. The author was so detailed and had such great comparisons that it was as if I was actually there and seeing these things. Normally when I read a book, the descriptions of anything are barely there and it's easy to look over and get your own picture, only to be proven wrong in a page or two. But with this book, they're impossible to ignore and give just enough to your imagination to give each person a picture of the amazing things that Scarlett is seeing.

The characters
They were really interesting, to me at least. They were each unique and had different faults. Tella was a bit strange to me, but that's just a personal opinion maybe? Like, I feel like she changed somewhere in the middle, but I suppose her story only began here so maybe later on she'll make more sense. The characters certainly developed throughout the course of the book, I thought. You really got to understand Scarlett as time passed and her emotions. So that definitely kept me intrigued as well.

The story
OH MY GOODNESS IT WAS SO INVENTIVE! When I started reading it, I was feeling an inexplicable Phantom of the Opera vibe, but I think that was just wishful thinking. As I kept reading, I started to get a feel for the story and OH it was amazing. The world of Caraval, the entire game, the HISTORY of that game, it was fantastic and SO well thought out. Twists and turns everywhere, it was definitely interesting. And for once, I can actually talk about how much I loved the story idea without divulging any spoilers, and that's how fantastic I thought this was. So many other things to talk about besides the actual events of the book.

Overall, I LOVED this book and I can't wait for the story to continue. In the beginning, I thought it was a standalone, and honestly I could read it like that. But the promise of more beautiful writing like this is WAY exciting. I hope the next one does not disappoint!

very intriguing! predictable in some ways and surprising in others. i enjoyed the twists and turns and characterization.

I really, really, really wanted to like this book.  I was so excited when I got it in my OwlCrateback in February!  Everything everyone was saying about this book was sparklers and fireworks and spellbinding magic.  A lot of it still is!  There were certainly aspects of this book that I enjoyed, but overall, it just wasn’t for me.

I immediately disliked all of the characters.  I just couldn’t bring myself to care about any of them.  They were too flat and quickly changing for my tastes.  Dontella’s characterization was immediately selfish and foolish whereas Scarlett was so self-righteous and panicky.  I just… didn’t like them.  For me, that ruins a book quicker than anything else.

This, surely, is personal to me as a reader.  There are others who go into stories with other motives, but if I don’t like the characters, I usually don’t like the book.

Caraval itself was interesting.  Stephanie Garber uses a lot of flowery imagery, and some of her word choices are lovely, but unfortunately, she uses this mostly to describe the men in the book and not the universe of it.  I didn’t start getting a visual sense of Caraval until easily over the halfway point.  Once I did, I found the illusory world very interesting, and wished that there was more interaction with it.

This story was about Scarlett running around like a chicken with her head cut off, stumbling into the right answers, and whining about needing to leave to get to her wedding on time.  Moreover, all the twists I was looking for didn’t happen, and the fact they didn’t happen was explained away as something far less scandalous and interesting.  Everything felt really disjointed, and put simply, I was BORED.  I feel like Garber had a really excellent idea here with the Caravel itself, but there was FAR too little Caraval-ing and far too much swooning and running-away-from-dad.  But she gets a star for the CONCEPT, because like I said – cool idea.

NOOOoooooo.  If you like pretty, flowy prose and need no semblance of plot, then this book is probably for you.  I happen to like pretty prose, but REQUIRE plot.  Also, the sunshine and daffodils of her writing were entirely focused on two items:  Julian’s attractive manly features, and Scarlett’s dresses.  I am 100% confident that she could have evened out the writing a bit and done better.

Also, repeatedly, “their mother, Paloma, abandoned them”?  I got it the first three times, thanks.  And she wasn’t very relevant to this book, either.  I understand that Garber is trying to garner reader interest in this disappearance for an upcoming plot, but obvious much?

I just didn’t like it.  I know a lot of people do, and I can see why:  there’s romance and Victorian dresses and private islands with mind games and fortune tellers – the works.  Disliking the characters and finding the plot too flighty were my main issues with this book, but it’s definitely the sort of thing that would appeal to other readers.

I will probably pick up the second book, but not in a hurry, and I wouldn’t buy it.