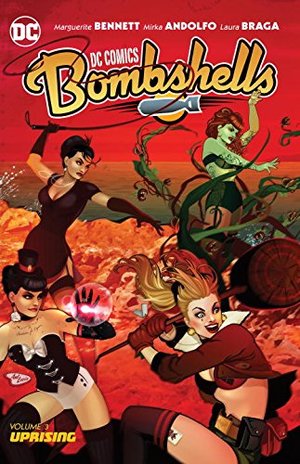 Marguerite Bennett
EUROPE, 1941. War is raging across the continent. The forces of darkness are on the march—and the magic powers of heroes like Zatanna, Mera and Constantine have been stripped away. And in the underground cabarets of Berlin, the Joker’s Daughter rules with an iron fist.   On the home front, the Batgirls—an army of freedom fighters modeled after their favorite Bombshell—battle against Gotham City’s most infamous criminals with the help of Maggie Sawyer and Lois Lane. And deep inside enemy territory, a rebel alliance is forming. Batwoman, Catwoman, Zatanna, Harley Quinn, Poison Ivy, Raven, Constantine, the Huntress and Renee Montoya are ready to strike hard and fast against the Nazi menace.   But when one Bombshell turns traitor, all bets are off…   The thrilling alternate-history saga of DC’s greatest heroines continues! Inspired by the hit DC Collectibles line, DC COMICS: BOMBSHELLS – VOL. 3: UPRISING reimagines the greatest conflict in human history! Collects issues #13-18.