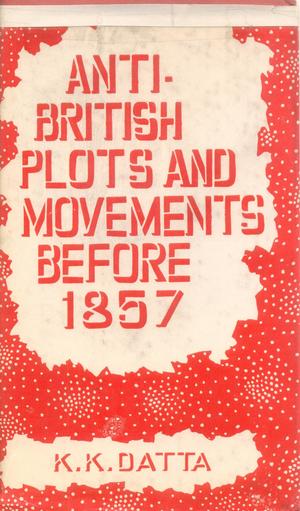 K. K. Dutta
From the middle of the eighteenth century the European Trading Company boldly jumped in to the field politics in India, and so far as English were concerned the verdicts at the Battle of Plassey (1757) and at the Battle of Buxar (1764) in their favour proved to be the significant turning points in their political supremacy in Bengal and Bihar. This strengthened authority of the English followed its logical sequel. Shah Alam II granted the Diwani of Bengal, Bihar and Orissa to English east India Company. The expansion of the British dominion in India and the growth of Indo-British administrative system conducted India through manifold process of transition - political, economic, social and cultural. This, for various reasons, generated fumes of discontent against the rule of the East India Company and there were secret plots or open revolts. The present work records the story of these anti-British plots and movements before the big outburst of 1857 came. The whole study, based on original sources, unpublished and published records, bears the mark of the deep understanding with which the author has dealt this subject and will be of value to all those who are interested in knowing as to how the torch of the spirit of freedom was kept burning in India and at what price.