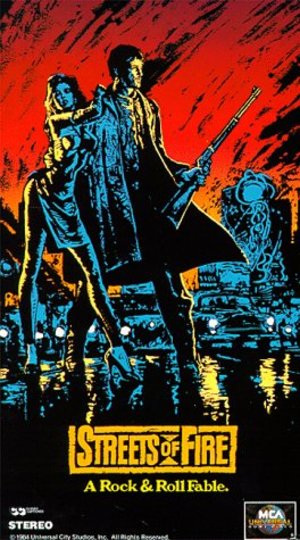 Walter Hill
Walter Hill's updated (1984), highly stylized take on biker movies still looks like a determinedly eccentric project that happens to work at times, but not at others. Michael Paré plays a biker who agrees to rescue his ex-girlfriend (a rocker played by Diane Lane) from kidnappers (led by Willem Dafoe). The ensuing battle against a nocturnal background of industrial blight, chrome, and loud music is like some fever dream of a Springsteen fan who listened to the song "Born to Run" far too often. The audacity of the film carries it a long way even after it becomes clear that Hill's experiment is crumbling under its own weight. Dafoe, who looked even spookier back then than he does now, is memorable, as are Amy Madigan and Rick Moranis. Music is by Ry Cooder, with an appearance by the Blasters. The DVD release has a widescreen presentation, optional French soundtrack, optional Spanish subtitles. --Tom Keogh