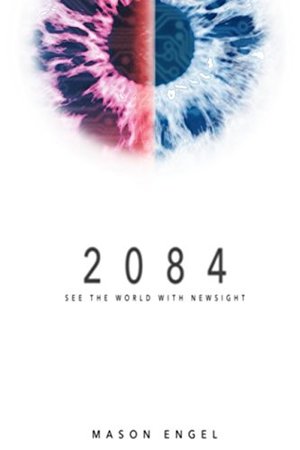 Mason Engel
The year is 2084, and the spying eyes of Big Brother are nowhere to be found. The world is not a dystopia. Not yet. Every citizen wears Lenses, computerized glass contacts manufactured by a corporation called Newsight. The technology is regulated by the Senate, so no one worries about breaches in privacy. A teenage boy named Vincent, however, feels quite differently. After his Senator father tells him that Newsight has been pushing for an appeal on the data regulations, Vincent begins to dig deeper. He learns that Newsight’s CEO claims to want to use the data in his fight against the Order, a terrorist organization whose attacks have recently been mounting in frequency, but the man’s true motives aren’t so clear - until Vincent meets a girl from school whose father is a Newsight developer. There is a trail of bread crumbs in the software’s code. Newsight has a closer relationship to the Order than anyone may have guessed, and the Lenses have been doing more than just running simulations. Caught in the middle of a world blinded by progress, Vincent finally discover the truth. But it might already be too late. “2084” casts a technocentric world into an Orwellian shadow. Told in close but unique parallel to “1984”, Vincent’s ever-quickening journey to the world’s new dystopia has left readers wanting more. “Honestly I didn't enjoy 1984 and don't usually like Sci-Fi/Post-Apocalyptic stories, so when my friends told me I had to check it out, I was more than hesitant. Surprisingly, after the first few pages, I couldn't put it down. It made my commute to/from work fly by. If 1984 had been this engaging, I would have paid more attention in high school. Perfect short read for book clubs on the go. One complaint: I WANT MORE.” “Engel is able to create vividly detailed environments without slowing the pace his story. Definitely a good quick read that makes me want to see more by him.”