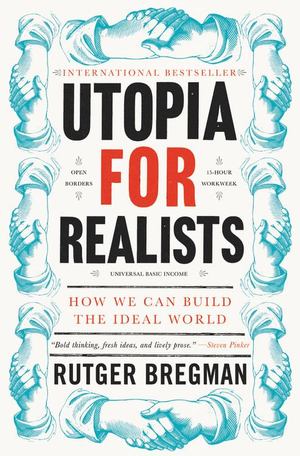 Rutger Bregman
From one of Europe's leading young thinkers, a brief history of utopia and a pragmatic manifesto for how to improve the lives of the 99 percent today A majority of Americans report that they would take two extra weeks of vacation above two extra weeks of salary, half of all business professionals say that their work offers no meaning or significance, and nearly half of all American jobs are at a high risk of being usurped by machines. Meanwhile, after working all day at jobs we often dislike, we buy things we don't need. Rutger Bregman, a Dutch historian, reminds us it needn't be this way-and in some places it isn't. This guide to a revolutionary yet achievable utopia offers three core ideas-a universal basic income, a fifteen-hour workweek, and open borders across the globe-each of them supported by lively anecdotes, multiple studies, and numerous success stories. Utopia for Realists is one of those rare books that takes you by surprise and challenges what you think can happen. From a Canadian city that once completely eradicated poverty, to Richard Nixon's near implementation of a basic income for millions of Americans, Bregman takes us on a journey through history, and beyond the traditional left-right divides, as he champions ideas whose time have come. Utopia for Realists offers the encouraging news that we really can reconstruct society with a visionary approach that is wholly implementable. Every progressive milestone of civilization-from the end of slavery to the beginning of democracy-was once considered a utopian fantasy. Bregman's book, both challenging and bracing, demonstrates that new utopian ideas, like the elimination of poverty and the creation of the fifteen-hour workweek, can become a reality in our lifetime. Being unrealistic and unreasonable can in fact make the impossible inevitable, and it is the only way to build the ideal world.