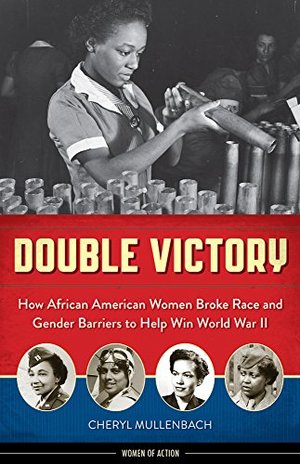 Cheryl Mullenbach
2014 Amelia Bloomer Top Ten ListDouble Victory tells the stories of African American women who did extraordinary things to help their country during World War II. In these pages young readers meet a range of remarkable women: war workers, political activists, military women, volunteers, and entertainers. Some, such as Mary McLeod Bethune and Lena Horne, were celebrated in their lifetimes and are well known today. But many others fought discrimination at home and abroad in order to contribute to the war effort yet were overlooked during those years and forgotten by later generations. Double Victory recovers the stories of these courageous women, such as Hazel Dixon Payne, the only woman to serve on the remote Alaska-Canadian Highway; Deverne Calloway, a Red Cross worker who led a protest at an army base in India; and Betty Murphy Phillips, the only black female overseas war correspondent. Offering a new and diverse perspective on the war and including source notes and a bibliography, Double Victory is an invaluable addition to any student’s or history buff’s bookshelf.