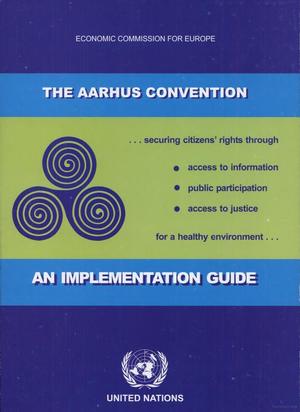 Stephen Stec, Susan Casey-Lefkowitz, Jerzy Jendroska, United Nations, Economic Commission for Europe (Contribution by), Danish Cooperation for Environment in Eastern Europe Staff (Contribution by), Regional Environmental Center for Central and Eastern Europe Staff (Contribution by)
The Convention on Access to Information, Public Participation in Decision-making and Access to Justice in Environmental Matters (Aarhus Convention) was adopted at the Fourth Ministerial; Conference "Environment for Europe" in Aarhus, Denmark, on 25 June 1998, Thirty-nine countries and the European Community have since signed it. The Aarhus is a new kind of environmental agreement. It links environmental rights with human rights. The Convention focuses on the interactions between the public and public authorities in a democratic context and it is creating a new process for public participation in the negotiation and implementation of international agreements. This guide provides both a general overview and a detailed article-by-article analysis of the Convention. The guide also analyses each provision of the Convention to clarify both the fixed obligations, the obligations that allow for some flexibility, and the options for implementation in each case.