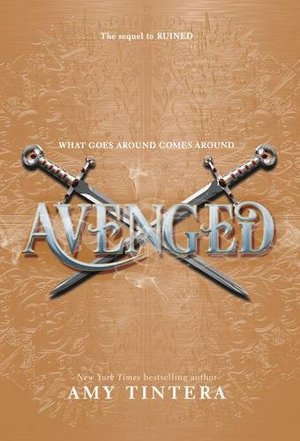 Amy Tintera
With the romance of The Selection and the epic stakes of Red Queen, Amy Tintera’s New York Times-bestselling Ruined trilogy continues with the thrilling young adult fantasy Avenged.Emelina Flores has come home to Ruina. After rescuing her sister, Olivia, from imprisonment in rival kingdom Lera, Em and Olivia together vow to rebuild Ruina to its former glory.But their fight has only begun. Olivia is determined to destroy everyone who acts against Ruina. Em isn’t as sure. Ever since Em posed as Prince Casimir’s betrothed in Lera, she’s started to see another side to this war. And now that Cas has taken the throne, Em believes a truce is within reach. But Olivia suspects that Em’s romantic feelings for Cas are just coloring her judgement.Em is determined to bring peace to her home. But when winning the war could mean betraying her family, Em faces an impossible choice between loyalty and love. Em must stay one step ahead of her enemies—and her blood—before she’s the next victim in this battle for sovereignty.

AVENGED is the second book in the Ruined series by Amy Tintera. The first in the series is RUINED, and the final book ALLIED just released. The author previously wrote the Reboot duology.

AVENGED picks up what seems like a few days to weeks after RUINED ends. Em and her sister have finally arrived home, only to discover their palace and their people in ruins. Em is heartbroken after leaving Cas and it is quickly becoming clear that Olivia is at least a little bit crazy. It is clear to the reader long before Em accepts it that whatever happened to Olivia while she was imprisoned and tortured left her broken inside. That combined with the ruthless nature her mother installed in her makes Olivia very dangerous.

Despite everything mentioned above, Em refuses to see anything but the best in Olivia. In fact, Em usually tries to see the best in everyone. This can be helpful to her, but it can also make her naive. Em repeatedly gets burned by people she trusts, and I hope she can still maintain some of her hopefulness when this is all over.

I really like the characters in AVENGED. Aside from Em and Olivia, there is also Cas, the crown prince of their rival nation. By this point, Em and Cas are hopelessly in love with each other, but on opposite sides of a war. Even that doesn’t prove to be a detriment to them. I also enjoyed watching the relationship between Aren and Iria, a new warrior from Oslo, develop.

This was very much a travel book. The characters were constantly in motion across various countries. It makes me wish that there was a map in the book so I could really visualize how far they were traveling. In my opinion, it should be required that every fantasy novel have a map in the front cover, unless it would lead to spoilers. That said, Tintera does a good job of describing the different locations, so each place is independent of others.

I recommend this series to fans of high fantasy novels in general, especially THRONE OF GLASS and OF FIRE AND STARS. While it doesn’t necessarily stand out from the crowd, AVENGED is thoroughly enjoyable.