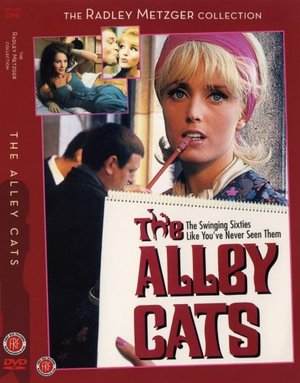 Radley Metzger
The swinging Sixties have never looked so sexy, fun and erotic as in Radley Metzger's second solo feature The Alley Cats! When Leslie, a member of Europe's wealthy swinging set, feels ignored by her fiancee Logan (who is in the midst of a tempestuous affair with Leslie's friend Agnes) she decides to do some swinging herself. Her first lover, the suave, debonair Christian, pleases her greatly, but is soon called away on business. Frustrated, Leslie responds to the advances of Irena, a beautiful lesbian socialite. Soon she must choose between her fiancee Logan and her awakened lesbian feelings. This newly remastered video, presented in widescreen Ultrascope, features a scintillating, jazzy lounge music soundtrack and the original theatrical trailer.