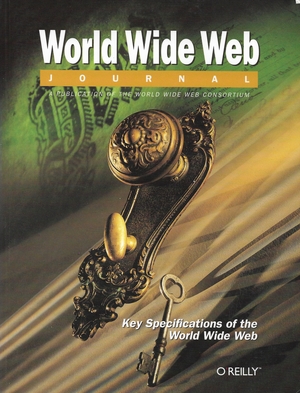 W3 Consortium Staff, O'Reilly Media, Inc. Staff
The Internet's World Wide Web is an open architecture that encourages innovation and interoperability. From the very beginning of the Web at CERN, the specifications that described how the Web works were drafted by Tim Berners-Lee and made available online. Since then, these documents have been drafted as RFCs (Request For Comment) to conform with standardization process established by Internet Engineering Task Force (IETF). Today, the repository of these documents is maintained online at World Wide Web Consortium, which is also developing new specifications. In this issue, these key papers are collected in a single volume as an important reference for the webmaster, application programmer, or technical manager.The specifications cover the basic architecture of the WWW, as well as newly developing features.Its most basic specifications are: HTTP, the Hypertext Transfer Protocol, defines how content is conveyed across the Web (HTTP 1.0 and 1.1). URLs, or Uniform Resource Locators, are the addressing mechanism for the Web (Internet RFCs 1630, 1736, 1738, and 1808). HTML, the Hypertext Markup Language, is the lingua franca of the Web (HTML 1.0 and 2.0, RFCs 1866 and 1867). New specifications likely to impact the development of the Web are also included: PNG is a newly developed graphics format created specifically for the Web. PICS, or Platform for Internet Content Selection, creates the infrastructure for content rating and labeling services. PEP is an extension mechanism for HTTP intended to allow HTTP agents to interoperate with unknown protocol extensions and to negotiate protocol extensions. HTML tables has the ability to group table rows into sections, plus can specify cell alignment compactly for sets of cells according to context. The World Wide Web Consortium (W3C), led by Tim Berners-Lee, the original visionary for the Web, spearheads standards research and development for the Web. Over 150 member organizations participate in the painstaking work of keeping open access to web information.The first issue of the World Wide Web Journal, released January 1996, contains the proceedings of the Fourth International World Wide Web Conference, held in December 1995 in Boston, Massachusetts. It includes 57 refereed technical papers, as well as the two best papers from regional conferences.