Couple Next Door: A Novel, The 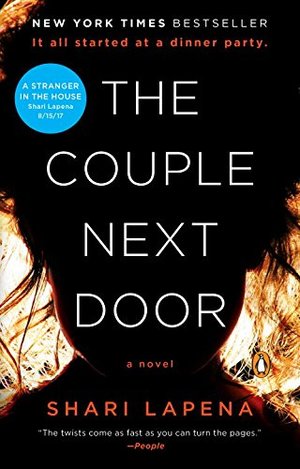 Shari Lapena
An instant New York Times bestseller. Look out for Shari Lapena's next thriller, A STRANGER IN THE HOUSE, coming August 2017.“The twists come as fast [as] you can turn the pages.” —People“Provocative and shocking.” —Lisa Gardner, New York Times bestselling author of Find Her“I read this novel at one sitting, absolutely riveted by the storyline.  The suspense was beautifully rendered and unrelenting!” —Sue Grafton, New York Times bestselling author of XIt all started at a dinner party. . .A domestic suspense debut about a young couple and their apparently friendly neighbors—a twisty, rollercoaster ride of lies, betrayal, and the secrets between husbands and wives. . .Anne and Marco Conti seem to have it all—a loving relationship, a wonderful home, and their beautiful baby, Cora. But one night when they are at a dinner party next door, a terrible crime is committed. Suspicion immediately focuses on the parents. But the truth is a much more complicated story.Inside the curtained house, an unsettling account of what actually happened unfolds. Detective Rasbach knows that the panicked couple is hiding something. Both Anne and Marco  soon discover that the other is keeping secrets, secrets they've kept for years. What follows is the nerve-racking unraveling of a family—a chilling tale of  deception, duplicity, and unfaithfulness that will keep you breathless until the final shocking twist.

Of the two psychological thrillers I read yesterday, this was definitely the better one, especially for being a debut. Many authors can’t seem to keep the threads of such a detailed story together, but Lapena does it effortlessly.

First, the characters. In my opinion, one of her strong suits. Each of the main players were well-crafted, their emotions and reactions rang incredibly true to the story playing out. But even her silent, secondary characters added to the tension of the story. For example – Graham, Cynthia’s reticent husband. Whether it was planned or happened by chance, the author turned him into a red herring. As the synopsis states, it all started at a dinner party. During that time, I’m not even sure whether Graham actually speaks, but from the beginning I had a sense that he (and his wife) were somehow involved. I won’t give away any spoilers here, but let’s just say that it did not turn out as it might have been set up to. This book is an example of how important titles really are. The Couple Next Door along with Graham’s off demeanor – I kept expecting him to play a bigger part almost up to the end.)

As I mentioned, I give the author credit for keeping so many details, twists, and turns straight. Unless you’ve ever tried to write a psychological thriller, I doubt you have any idea what a feat that is, and she does it remarkably well.

The only two things I found a bit distracting was 1) the fact that on at least three occasions, the author (through a character) went through a detailed checklist of what the characters (and the reader) knew to that point. To me anyway, it seemed liked the author’s way of saying, “Okay, are you with me so far?” And 2) several times in the middle of a high action scene, a character goes off on a narrative trip offering backstory that isn’t relevant at that moment. That information, although necessary at some point, was misplaced. I felt it could have been worked in at a better time. Aside from that, it was a pleasing read that I finished in one sitting.

As a side note, if you’ve read The Couple Next Door, and enjoyed it, you might be interested in her new book, A Stranger in the House, which releases August 15th. I know I’ll be getting a copy.