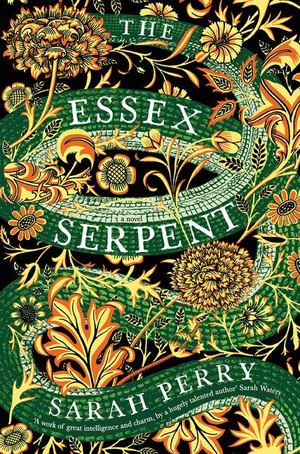 Sarah Perry
Costa Book Award Finalist and the Waterstones (UK) Book of the Year 2016 "I loved this book. At once numinous, intimate and wise, The Essex Serpent is a marvelous novel about the workings of life, love and belief, about science and religion, secrets, mysteries, and the complicated and unexpected shifts of the human heart—and it contains some of the most beautiful evocations of place and landscape I’ve ever read. It is so good its pages seem lit from within. As soon as I’d finished it I started reading it again."—Helen MacDonald, author of H is for Hawk An exquisitely talented young British author makes her American debut with this rapturously acclaimed historical novel, set in late nineteenth-century England, about an intellectually minded young widow, a pious vicar, and a rumored mythical serpent that explores questions about science and religion, skepticism, and faith, independence and love. When Cora Seaborne’s brilliant, domineering husband dies, she steps into her new life as a widow with as much relief as sadness: her marriage was not a happy one. Wed at nineteen, this woman of exceptional intelligence and curiosity was ill-suited for the role of society wife. Seeking refuge in fresh air and open space in the wake of the funeral, Cora leaves London for a visit to coastal Essex, accompanied by her inquisitive and obsessive eleven-year old son, Francis, and the boy’s nanny, Martha, her fiercely protective friend. While admiring the sites, Cora learns of an intriguing rumor that has arisen further up the estuary, of a fearsome creature said to roam the marshes claiming human lives. After nearly 300 years, the mythical Essex Serpent is said to have returned, taking the life of a young man on New Year’s Eve. A keen amateur naturalist with no patience for religion or superstition, Cora is immediately enthralled, and certain that what the local people think is a magical sea beast may be a previously undiscovered species. Eager to investigate, she is introduced to local vicar William Ransome. Will, too, is suspicious of the rumors. But unlike Cora, this man of faith is convinced the rumors are caused by moral panic, a flight from true belief. These seeming opposites who agree on nothing soon find themselves inexorably drawn together and torn apart—an intense relationship that will change both of their lives in ways entirely unexpected. Hailed by Sarah Waters as "a work of great intelligence and charm, by a hugely talented author," The Essex Serpent is "irresistible . . . you can feel the influences of Mary Shelley, Bram Stoker, Wilkie Collins, Charles Dickens, and Hilary Mantel channeled by Perry in some sort of Victorian s#65533;ance. This is the best new novel I’ve read in years" (Daily Telegraph, London).

Also there were some parts that was very hard for me to read bcs it hits too close to home, but also the pace was really slow and eeverything was just meh at best.

And i honestly just can't get through the last 50 pages or so.