James and the Giant Peach 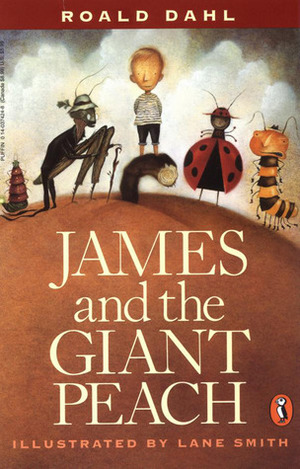 Roald Dahl
Roald Dahl was a champion of the underdog and all things little—in this case, an orphaned boy oppressed by two nasty, self-centered aunts. How James escapes his miserable life with the horrible aunts and becomes a hero is a Dahlicious fantasy of the highest order. You will never forget resourceful little James and his new family of magically overgrown insects—a ladybug, a spider, a grasshopper, a glowworm, a silkworm, and the chronic complainer, a centipede with a hundred gorgeous shoes. Their adventures aboard a luscious peach as large as a house take them across the Atlantic Ocean, through waters infested with peach-eating sharks and skies inhabited by malevolent Cloudmen, to a ticker-tape parade in New York City. This happily ever after contemporary fairy tale is a twentieth-century classic that every child deserves to know. And Lane Smith's endearingly funny illustrations are a perfect match for the text.

I was first introduced to "James and the Giant Peach" when I was a kid. I found it to be a delightful story but also somewhat dark. Now as an adult, I still think this way. While it is a creative story with interesting characters and a whirlwind adventure, the story itself has a dark undertone and some oddball characters. I guess its fantasy so no one really questions it. The aunts always creeped me out as well. If this was a real story, children services would have gotten involved. I do think that kids will still enjoy the fantastical portion of this story but it may not be to everyone's liking as it isn't really a colorful and high spirited story.

James and the Giant Peach by Roald Dahl is a book about a boy named James who lives with his aunts because his parents were eaten by a rhino in London. He is treated terribly, but one day he found some little things that made a peach grow a lot. He enters the peach and meets some some insects that grew because the little things. They run away from the house with the peach and have a very long journey.

I think this is a very funny book and it gets better as the story goes. My favorite part is when they tie some seagulls to the peach to escape the sharks. The adventure is part of the story, but with some funny parts.

It is a very hilarious and brilliant book by Roald Dahl.

In James and the giant peach,by Roald Dahl,a boy named james, after the death of his parents has life become miserable with his rude aunt spiker and aunt sponge.One day something very