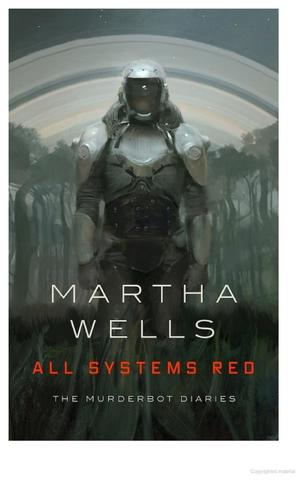 Martha Wells
A murderous android discovers itself in All Systems Red, a tense science fiction adventure by Martha Wells that interrogates the roots of consciousness through Artificial Intelligence. In a corporate-dominated spacefaring future, planetary missions must be approved and supplied by the Company. Exploratory teams are accompanied by Company-supplied security androids, for their own safety. But in a society where contracts are awarded to the lowest bidder, safety isn’t a primary concern. On a distant planet, a team of scientists are conducting surface tests, shadowed by their Company-supplied ‘droid — a self-aware SecUnit that has hacked its own governor module, and refers to itself (though never out loud) as “Murderbot.” Scornful of humans, all it really wants is to be left alone long enough to figure out who it is. But when a neighboring mission goes dark, it's up to the scientists and their Murderbot to get to the truth. At the Publisher's request, this title is being sold without Digital Rights Management Software (DRM) applied.

@torykohrin
Reviewed: 2021-05-22
I am sorry but the more I read this series, the more I am convinced this is a brilliant piece of literature and perfect sci-fi with an amazing plot and I just keep finding scenes and other proof why I adore it more and why people would adore it to the point I shifted my rating from 4 to 5 stars which I think warrants some additional comments though at the same time, I have come to that point where I am too excited about the book to see it "objectively" and ma brain interrupts any factual points with the persistent sentiment of "amazing!" and "you read it or you're dead to me". What can I say, my brain can be quite the drama queen.

To make this into a review and add to the below divided original review, let's revise the best features:

- length: short
I am not saying it's not hard to write an epic saga but to squeeze everything you need into just the number of pages you need means a) the plot is brisk b) no boring or blind spots c) won't take you the whole day d) only contains what it needs, no huge monologues, no unnecessary dialogue, description etc.

- world: complex
Sci-fi is about technology but of course there is always more and the books touch in some manner on all the important areas to create an image of the world: economy, daily life of citizens, travel, free time, politics...

- world: diversity
I sometimes talk about those two approaches to dealing with diversity: and this is the second, my more preferred option, where instead of focusing on injustice, the author just casually offers her idea of how it should work according to her, no one being bothered by who people love or sleep with, have those designated new labels, casually mentions one new gender with grammatical necessities and calls any committed relationships marital units, who can be seen realistically, with nice things and the problems.

- MC
Basically, the whole series is about a bot who just wants to watch entertainment all day but is designed as a security unit and ends up saving "silly! or not that stupid humans from problems and threats. Her voice is complex, it makes you think, it's hilarious, it's sarcastic, it's rife with these silent and powerful emotions, makes some great remarks about people and events around her... She's a badass with a pleasantly, surprisingly(?) human core.

- Action
The action scenes also play an important role and get everything moving, from some outright big fights to more silent missions, it's all super cool, not trying to pretend it's some action movie, just the right amount of description and fighting.

- Several "crews"
It cycles between some groups as the MC travels around.

- Technology
Also plays an important role yet is just part of the world, seamlessly integrated.

It's pretty much the diary of a half-human half-robot made to be a security/killing machine (like a thug) except she managed to throw off her programming enough to realize she's just an introverted being who wants to binge-watch telenovelas or just some entertainment in peace.

She also totally makes same great remarks that the introverted readers (a.k.a me) can totally identify with like: (paraphrasing) I may be more fond of imaginary, fictional humans more than the real ones but you do need those real people to create the fictional ones.

And the off-hand comment of people living not just in pairs but in larger "martial units" where the genders are not always clear? Feels like a really kick-ass way to put in your piece on the pie without really trying to win some illusionary fights. I adore it! Simple, subtle, powerful.

It was simply a unique piece of sci-fi, so on, so forth and I am going for the next one so...

@scaredofspiders
Reviewed: 2018-12-26
How unexpectedly and weirdly wonderful this was! I've always enjoyed Martha Wells but this was an entirely uncharted territory for us to explore, together. It's a rather short novella, akin in length to longish entry in an anthology. I absolutely want to read more of Murderbot's Diaries, though. The sense of humor was priceless.
@Spurts
Reviewed: 2018-04-16