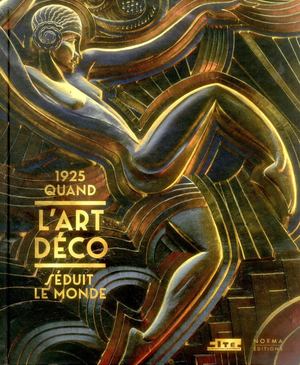 Emmanuel Bréon, Philippe Rivoirard
-Taking the emblematic Exposition des arts decoratifs de Paris of 1925 as its starting point, this catalog traces the development of the Art Deco movement around the globe in every domain - France, Serbia, Brazil, Belgium, to name just a few countries -Includes a variety of topics such as architecture, jewels, fashion, books The Exposition des arts decoratifs de Paris of 1925, constitutes a milestone in the history of the Art Deco movement, and had a decisive influence on the world. Over the following decade, many French architects and decorators were called upon to work on major international projects. French embassies and ocean liners were their Trojan horse. In 1925, things had to be modern. The development of aviation and the automobile demanded it, and for the first time garages and aerodromes were being built in large numbers. Although Art Deco is often associated with luxury, it also influenced the design of low-cost housing and garden cities, while department stores and shops created their own home decoration lines to meet demand. This was the advent of the modern woman, exemplified by the flapper who smoked, drove cars, flew airplanes and chose her own architect-decorator. She never forgot to be elegant and both the men and women couturiers, friends of architects, invented sportswear just for her. Paris in 1925 was the center of the world, and the foreigners in Montparnasse breathed new life into older colors. There was Cubism too, calling for a geometric order of squares, lozenges and zig-zags. But it was Josephine Baker, dropping her belt of bananas for an instant, who set everyone straight, reminding them of the debt modern art and the new movement owed to African cultures. More than a date, 1925 was a state of mind: this book reveals how the "Roaring Twenties" followed on the heals of the "Belle Epoque," Art Deco followed Art Nouveau, and also how, through this apparent continuity, the features of global and modern art appeared and became dominant after impatiently waiting their turn to blossom. This movement, bubbling up in the champagne of the return to peace, was hailed for its glamour and inventiveness, adopted and adapted by everyone, every country, in a constantly renewed effervescence of motifs, forms and colors. Today, Art Deco societies around the globe, wishing to preserve and maintain the memory of this common patrimony, remind us of its universal influence. Text in French.