Book of Joan, The 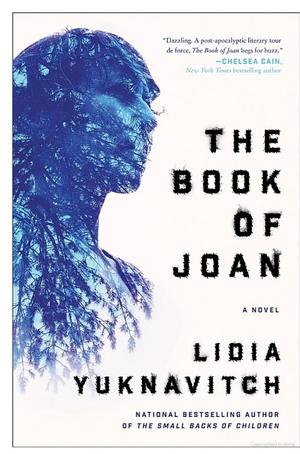 Lidia Yuknavitch
The 25 Most Anticipated Books by Women for 2017, Elle Magazine The 32 Most Exciting Books Coming Out in 2017, BuzzFeed 50 Books We Can’t Wait to Read in 2017, Nylon Magazine 33 New Books to Read in 2017, The Huffington Post Most Anticipated, The Great 2017 Book Preview, The Millions The bestselling author of The Small Backs of Children offers a vision of our near-extinction and a heroine—a reimagined Joan of Arc—poised to save a world ravaged by war, violence, and greed, and forever change history, in this provocative new novel. In the near future, world wars have transformed the earth into a battleground. Fleeing the unending violence and the planet’s now-radioactive surface, humans have regrouped to a mysterious platform known as CIEL, hovering over their erstwhile home. The changed world has turned evolution on its head: the surviving humans have become sexless, hairless, pale-white creatures floating in isolation, inscribing stories upon their skin. Out of the ranks of the endless wars rises Jean de Men, a charismatic and bloodthirsty cult leader who turns CIEL into a quasi-corporate police state. A group of rebels unite to dismantle his iron rule—galvanized by the heroic song of Joan, a child-warrior who possesses a mysterious force that lives within her and communes with the earth. When de Men and his armies turn Joan into a martyr, the consequences are astonishing. And no one—not the rebels, Jean de Men, or even Joan herself—can foresee the way her story and unique gift will forge the destiny of an entire world for generations. A riveting tale of destruction and love found in the direst of places—even at the extreme end of post-human experience—Lidia Yuknavitch’s The Book of Joan raises questions about what it means to be human, the fluidity of sex and gender, and the role of art as a means for survival.

I want to blame the narrator of this audiobook, but I strongly suspect that I am not smart enough for The Book of Joan.  I found myself listening very hard to make sure I didn’t miss something important.  Conceptually, The Book of Joan is somehow both gruesome and beautiful and while I actually really liked it, it was a difficult listen for me.  Part warning, part dystopia, this book tells the story of the world after a nuclear event and the evolution and cruelty of the human race.  It is in some ways a retelling of the Joan of Arc story… but it is far more something original.

First of all, this book was told in two POVs – Christine and Joan.  All the characters in this book are interesting.  The switching POVs presented a challenge to me because the narrator did not make it easily clear when the perspective was Christine of Joan.  These characters, representative of Joan of Arc and her chronicler Christine de Pezan, tell two very different perspectives of the fall of humanity.  Christine lives in CIEL, the place where the wealthy have come to escape dying Earth.  As an aftereffect of the fallout, Christine and her peers are physically androgynous.  Christine and her love Trinkolo – a fool of Shakespearean affect – are scholars of Joan of Dirt and goat her stories on to their skin.  Christine is quiet, but angry.  Trinkolo is passionate, just this side of insane.  I adored him.  But for Christine and Joan?  I was bored.

Joan is important to the story because she has a direct energy line to the earth.  She’s also the only one who has retained her sexual organs in their full function.  So much of this new world is obsessed with sex, mostly as a carnal pleasure lost… but also because of the problem of reproduction.  In parts, we hear about Joan’s place in the end of the world.  The writing is very lyrical, beautiful.  It’s  a lot.

I think that’s the most of it.  The story is fascinating, and the message of caring for the planet is important, but The Book of Joan is very heavy and because of it’s lyrical writing, it’s difficult to absorb. At least, it was for me.  As I said, I feel like I am simply not quick enough, not smart enough for a book like this.

I will say this much – I think that The Book of Joan NEEDS to be read in hard copy.  It’s simply too dense for a audiobook.

As far as an overall feeling, I don’t think I can fully say I liked it?  I didn’t dislike it either, though.  I was fascinated by the world, but also disgusted by CIEL and in many places, simply bored.  It was an interesting undertaking, but I’m not sure who, if anyone, I would recommend it to.  This was added to my TBR because it was touted as a Joan of Arc retelling… which it is in part.  But it’s more a warning than traditionally retelling.  It is interesting, but it was difficult and I’m not sure it’s something I would try and read again.