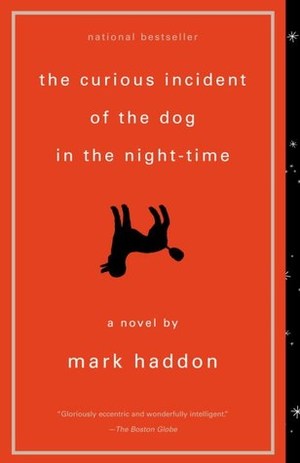 @virago
Reviewed: 2021-10-12
I really enjoyed this book. Christopher was just too pure for the world, and I wanted to hug him, but he would have hated that. Christoper is an autistic boy who finds the neighbor's dog murdered. Initially he is blamed for it because he's found at the scene of the crime cradling the dog. Christopher is then determined to act as a detective like Sherlock Holmes and discover who killed poor Wellington the dog. This book is told in the first person, which usually makes me cringe and stop reading; however, it was so beautifully written that I feel as though I got a chance to see the thinking process of an autistic person first hand. It was very fascinating to see how his thought process worked; how he saw and interacted the world and the people around him. In the middle searching for the killer, Christopher uncovers an entirely different mystery regarding his family. His dad has been lying to him and throws his world into a tailspin. This book is funny and engaging and gives a small bit of insight into the life of a person with autism, and being the parent of a child with autism.
@kirbyb
Reviewed: 2021-02-04
3.89
@rascalbooks
Reviewed: 2020-10-24

@aezell
Reviewed: 2019-05-08
This is a one-trick pony which uses a gimmick to tell a pedestrian and utterly unmoving story. All the critics had the wool pulled over their eyes on this one. The trick could have been used to great effect if any of the other characters around Christopher were worth caring about. Yes, the author makes us care about someone who shows and understands no emotion, but he doesn't have to with the flat and static characters around him.
@areedcollett
Reviewed: 2018-08-19