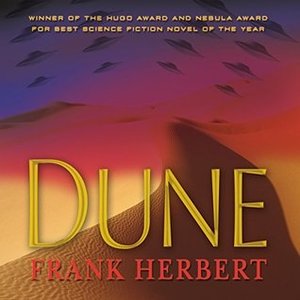 Frank Herbert
Here is the novel that will be forever considered a triumph of the imagination. Set on the desert planet Arrakis, Dune is the story of the boy Paul Atreides, who would become the mysterious man known as Muad'Dib. He would avenge the traitorous plot against his noble family--and would bring to fruition humankind's most ancient and unattainable dream. A stunning blend of adventure and mysticism, environmentalism and politics, Dune won the first Nebula Award, shared the Hugo Award, and formed the basis of what it undoubtedly the grandest epic in science fiction.

Dune’s Exploration of Time Is Timeless

Dune by Frank Herbert is a great book regardless of how you decide to look at it.  The book was published on August 1, 1965 by Chilton Books and is 412 pages long.  In one view, it is a well thought-out story of survival and fighting for what is right, but in another, it is a complex story about how religion shapes the world.  The book blends the two tales perfectly, allowing the reader to focus on just one or both, but not forcing the reader into focusing on either story by starving them of developments.

On the religious side of things, the reader is shown multiple views of the main religious group, called the Bene Gesserit, who are shown to be everywhere.  But, with the events in the book being placed in the far future, the history of religion must be explained and it needs to show what happened to the religions that originated from Earth.  This telling of the history of Earth’s religions is done subtly and well, allowing the reader to put the story together on their own if they are paying attention, but not allowing them to stumble over it.  The story of Paul and his mother Jessica is also tied to religion in many aspects, even when they try to escape religion altogether. Their story is one of surviving in the harsh Arrakeen desert while biding their time, waiting for the perfect opportunity to return to the world that is rightfully theirs.

Their story is told well, taking advantage of shifting perspectives to show personal motives and inner thoughts, creating a detailed visual of everything that happens.  The changes in perspective also allow some characters to be shown to know more than other characters in some situations while being clueless in others, Herbert using dramatic irony perfectly throughout the book.  With the way their story is told, the relationships between characters are explored, even the minor characters’ relationships. Not only are the characters described well, but the world that the book creates is described to a level that allows the reader to visualize it while it still holds an air of mystery.  The reader can truly visualize how the vast desert looks with large sections of rock jutting from the horizon while not knowing exactly what any part of the world is. Slowly, the world and culture are explained and pieces of the massive puzzle can be put together, making a beautiful visual.

This mysterious nature of the book leaves the reader on the edge of their seat throughout everything, even when what will happen seems certain, some details will be different, causing a snowball effect to change the rest of what the future holds.  From the beginning of the story, it is known that Paul Atreides has prophetic visions, but the visions are just vague enough that the book can still catch the reader off their guard with twists and turns of the story. Dune, while answering many questions throughout the book, leaves just a few questions unanswered by the end, setting up perfectly for a continuation of the series.