Gentleman's Guide to Vice and Virtue, The 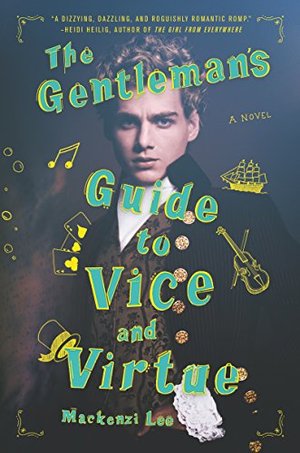 Mackenzi Lee
A hilarious and swashbuckling stand-alone teen historical fiction novel, named one of summer's 20 must-read books by Enternatinment Weekly!A young bisexual British lord embarks on an unforgettable Grand Tour of Europe with his best friend/secret crush. An 18th-century romantic adventure for the modern age written by This Monstrous Thing author Mackenzi Lee—Simon vs. the Homo Sapiens Agenda meets the 1700s.Henry “Monty” Montague doesn’t care that his roguish passions are far from suitable for the gentleman he was born to be. But as Monty embarks on his grand tour of Europe, his quests for pleasure and vice are in danger of coming to an end. Not only does his father expect him to take over the family’s estate upon his return, but Monty is also nursing an impossible crush on his best friend and traveling companion, Percy.So Monty vows to make this yearlong escapade one last hedonistic hurrah and flirt with Percy from Paris to Rome. But when one of Monty’s reckless decisions turns their trip abroad into a harrowing manhunt, it calls into question everything he knows, including his relationship with the boy he adores.Witty, dazzling, and intriguing at every turn, The Gentleman's Guide to Vice and Virtue is an irresistible romp that explores the undeniably fine lines between friendship and love.

** spoiler alert ** If you have followed along in any of my previous reviews, you can easily see that I finish really good books in 3-4 days. No matter the length or what is going on in my life.. this book is no different.

One thing I sort of rolled my eyes at was that Monty claims for the better part of the book to be “in love with his best friend” yet he continues to flirt, sleep and get involved with other people. It wasn’t until the end that he decided to set himself straight and stop all of that..

Towards the end there is a letter that he writes to his father while they are in Greece and oh my, Monty does have a way with words.

It is impossible to explain how you can love someone so much that it’s difficult to be around him. And with Percy sitting there, half in shadow, his hair loose and his long legs and those eyes I could have lived and died in, it feels like there’s a space inside me that is so bright it burns.

This book is absolutely beautiful. And for this to be on mainstream shelves makes me very happy. I fell in love with all of these characters, and Monty's inner voice was heartbreaking and frustrating at the same time. A character who for the most part grows into a man over the course of this adventure, despite the demons this boy carries. The writing is simply magnificient.

Perhaps he can’t understand it, the way that house will always be haunted for me, even if my father were gone from it. I can’t imagine living in it for the rest of my life, throwing parties in its parlors and filling the cabinets with my papers, all the while ignoring the dark spot on the dining room floor that’s never washed away, where I tore my chin open when my father knocked me to the ground with a single well-swung fist; or the hearth that chipped my tooth when I was thrown into it. There are bodies buried beneath the flagstones of my parents’ estate, and some graves never green.

I do wish we had also gotten sweet Percy's POV or a final scene between Monty and his father. I can only hope that we will get a third book to this series and perhaps a continuation of these boys as they grow further in their love for one another and continue to grow into the men they have become, standing on their own in a world so unaccepting of their love.

Felicity's story it seems is next. I am quite excited to see her continued adventures, perhaps with the "pirates" as she also looks to stand as a woman of purpose in a time where socially her worth has been predetermined.

Such amazingly developed fan art to accompany this beautiful journey.

Highly recommended.
@becandbones
Reviewed: 2018-03-22
My hearrrrrtttttt. I ship these two so freaking much.

RTC
@phannie
Reviewed: 2018-01-25
Henry “Monty” Montague has to take over his fathers business. But before doing so he wants to go on an adventure. He wants to travel with his best friend aka crush Percy for a whole year. During this trip both 18-year old boys need to stop to send Felicity Montague, Montys younger sister, to school. After their little trip Percy has to go to Law school. So of course both boys want to have fun on the Grand Tour. What they don’t know however is that Henrys father is sending them away with a sort of a babysitter. And as Monty is being himself the three teenagers will soon be in a lot of trouble and the real adventure begins!

I absolutely fricking adored this story and the MCs were so adorable! Felicity is probably my favourite, being the sassy young girl she is. Monty was freaking adorable and I don’t even speak about Percy because Percy is Percy and you have to like him. You just do. He’s such a nice young fellow. In this novel we hear a lot about racism and homophobia of the 18th century. The romance in Gentleman’s Guide is so cute and if you’re like me you’re going to squeal like a little girl at some parts. And I’m not a big fan of romance but this was so so cute! I felt like a fangirl while reading this book. I flew through this book as it is a fast-paced read. I kinda have the feeling, that I’m so lucky recently for having read books that are fast-paced. I’ve probably mentioned it a few times in my recent posts but I like to mention it again: I love these books you get to read them in a few hours, two days,… Most of the time they come without complications and I like that!

The ending of this book made me so happy! My only thought was: in your face! (If you’ve read the book you know what I mean) It was simply perfect! And now I want to know more about Felicity. Can’t wait for Lee to start writing that book.

There is nothing more to tell about this book. It was amazing! And I absolutely recommend it to you guys!

And as I’m in love with this quote of the book I’m going to end my post with it: “Abso-bloody-lutely fantastic!“
@ruthsic
Reviewed: 2018-01-25
If you were looking for a historical romance that involves adventure, pirates, great and diverse set of characters and an adorable protagonist, look no further. The Gentleman's Guide to Vice and Virtue tells the story of Henry, his sister Felicity and his best friend/crush Percy set out for a Grand Tour of Europe but instead get caught up in an adventure due to Henry's foolish decisions. From there, they have to keep ahead of a Duke who is hunting them down, find an alchemical marvel, save a priceless object from being lost forever, and hope they complete all this before they are caught and sent back home, or worse end up dead.

Henry, our humorous and charming protagonist, appears to be a privileged white boy who doesn't care much for others' problems. He is bisexual and unabashed about it, a fact his father wants to hide and abuses him for. He is not as courageous and fierce as his little sister, Felicity (bow down before her) but he has heart, and would go to the end of the world for his best friend Percy. Percy, a biracial guy, does not get all the privileges that Henry has despite being born in an elite household, but he is eternally kind and loves his best friend nevertheless. When his illness becomes known to Henry (who is now desperate to find the cure), he weighs the cost of the cure against the life he wants to live - a supremely noble intention. The story also tackles the issues of racism, and sexism in the 18th century and how it affected the lives of our characters.

You could say the central plot of the story is Henry learning about his privilege and growing up, discovering others' hardships. Not to say that he is selfish, but he is unaware and often thoughtless about what Percy goes through as a person of color or what limitations Felicity faces due to the fact that she is female. He is the clown of the group, of course, the immature, impetuous and careless one and the one they both take care of, but he redeems himself by the end of the story. The obstacle to his and Percy's relationship at first appears to be the fact that they are both men and, well, homosexuality was not even recognized as a valid sexuality at that time; it is, however, not the sole thing keeping them apart. Societal expectations, as well as their dependence on their respective families drive a wedge between them, and also Percy's illness which becomes a sore point.

I like that the author brought up the issues in a time when it wouldn't even be recognized. Sure, many historical YA romances have feminist heroines, but how many have a gently cultivated relationship between two boys, and a girl who is feminine but also yearns for an equal footing. The ending, however, does not completely resolve the issues that were recognized as obstacles to their happy ending - namely, Henry's and Percy's futures as being independent, Henry's fear of his father's abuse, Felicity's desire to become a physician - it was left too open-ended for my taste. But in its entirety, the book is a fun, entertaining and well-thought out story with a good historical perspective.