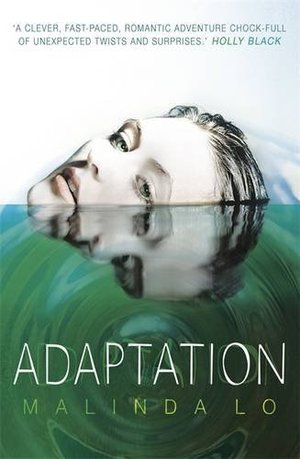 Malinda Lo
Reese can't remember anything from the time between the accident and the day she woke up almost a month later. She only knows one thing: She's different now.Across North America, flocks of birds hurl themselves into airplanes, causing at least a dozen to crash. Thousands of people die. Fearing terrorism, the United States government grounds all flights, and millions of travelers are stranded.Reese and her debate team partner and longtime crush David are in Arizona when it happens. Everyone knows the world will never be the same. On their drive home to San Francisco, along a stretch of empty highway at night in the middle of Nevada, a bird flies into their headlights. The car flips over. When they wake up in a military hospital, the doctor won't tell them what happened, where they are--or how they've been miraculously healed.Things become even stranger when Reese returns home. San Francisco feels like a different place with police enforcing curfew, hazmat teams collecting dead birds, and a strange presence that seems to be following her. When Reese unexpectedly collides with the beautiful Amber Gray, her search for the truth is forced in an entirely new direction--and threatens to expose a vast global conspiracy that the government has worked for decades to keep secret. Adaptation is a bold contemporary science-fiction thriller from the acclaimed author of Ash.

@ruthsic
Reviewed: 2018-01-25
Flocks of birds are hurling themselves at aeroplanes across America. Thousands of people die. Millions are stranded. Everyone knows the world will never be the same.

On Reese's long drive home, along a stretch of empty highway at night, a bird flies into their headlights. The car flips over. When they wake up in a military hospital, the doctor won't tell them what happened.

For Reese, though, this is just the start. She can't remember anything from the time between her accident and the day she woke up almost a month later. She only knows one thing: she's different now. Torn between longtime crush David and new girl Amber, the real question is: who can she trust?

Adaptation takes an old conspiracy theory 'they are among us' and put a non-cheesy spin on it - I was so excited about the prospect. Reese and David are subjects of a highly classified procedure during treatment for an accident that happened in the aftermath of a bizarre incident that stretched across North America (why not the rest of the world, I will never know) and when they get back, they feel changed. Reese is trying to get back to normal life but then gets flashes of dreams. She finds a new love in Amber (yes, she is bisexual) but can't shake of the dread that she is being watched. Compounded with the sexual tension whenever she is with David, things feel too much and start to overwhelm her. Before she knows it, they both are being dragged off to another government facility and it is there that the truths start to come out.

The first thing about Adaptation you notice is that it is heavily plot-driven, which doesn't leave much for the characters. They are mostly passive and being swept along in the story, which made me lose interest in them. I admit I loved the sci-fi parts, but even there there wasn't much that was being explained. It's only conspiracy and conspiracy and even more conspiracy - which are all being explained away by Julian, Reese's friend. Basically, the protagonists just are hapless victims and honestly, Julian and Amber do more than them. The writing felt a bit too expcessive at times - in instances where outfits and food (do I care which donut they bought?)was being described. A little detail is okay, especially when they foreshadow something, help visualize the scene or expand the dimension of the plot but needless ones only serve to drag the story down, IMO. The love triangle was a waste - too early in the plot if you ask me.

Honestly, I had expected much more from the book but it underwhelmed me. 3.5 stars.

Received an ARC from Hodder's Children's Books via Netgalley in exchange for an honest review
Item Posts
No posts
© 2020 libib.com / All rights reserved