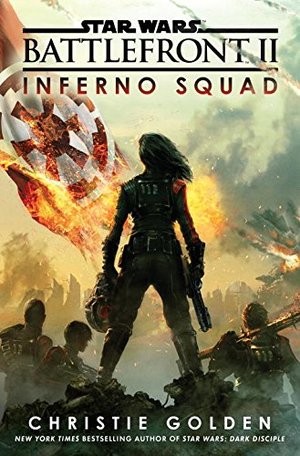 Christie Golden
Set in the aftermath of Rogue One: A Star Wars Story, this action-packed prequel to the hotly anticipated videogame Battlefront II introduces the Empire’s elite force: Inferno Squad.After the humiliating theft of the Death Star plans and the destruction of the battle station, the Empire is on the defensive. But not for long. In retaliation, the elite Imperial soldiers of Inferno Squad have been called in for the crucial mission of infiltrating and eliminating the Partisans—the rebel faction once led by notorious Republic freedom fighter Saw Gerrera. Following the death of their leader, the Partisans have carried on his extremist legacy, determined to thwart the Empire—no matter the cost. Now Inferno Squad must prove its status as the best of the best and take down the Partisans from within. But the growing threat of being discovered in their enemy’s midst turns an already dangerous operation into a do-or-die acid test they dare not fail. To protect and preserve the Empire, to what lengths will Inferno Squad go . . . and how far beyond them?The Rebellion may have heroes like Jyn Erso and Luke Skywalker. But the Empire has Inferno Squad.