Catcher in the Rye, The 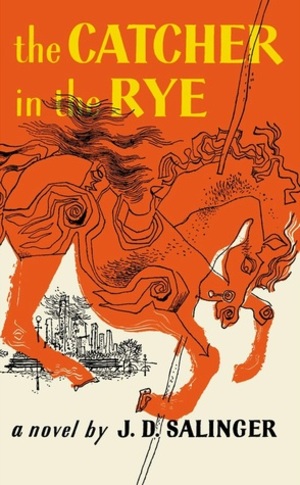 J.D. Salinger
Anyone who has read J.D. Salinger's New Yorker stories--particularly A Perfect Day for Bananafish, Uncle Wiggily in Connecticut, The Laughing Man, and For Esme With Love and Squalor--will not be surprised by the fact that his first novel is full of children. The hero-narrator of The Catcher in the Rye is an ancient child of sixteen, a native New Yorker named Holden Caulfield. Through circumstances that tend to preclude adult, secondhand description, he leaves his prep school in Pennsylvania and goes underground in New York City for three days. The boy himself is at once too simple and too complex for us to make any final comment about him or his story. Perhaps the safest thing we can say about Holden is that he was born in the world not just strongly attracted to beauty but, almost, hopelessly impaled on it. There are many voices in this novel: children's voices, adult voices, underground voices-but Holden's voice is the most eloquent of all. Transcending his own vernacular, yet remaining marvelously faithful to it, he issues a perfectly articulated cry of mixed pain and pleasure. However, like most lovers and clowns and poets of the higher orders, he keeps most of the pain to, and for, himself. The pleasure he gives away, or sets aside, with all his heart. It is there for the reader who can handle it to keep.

@crabbie4118
Reviewed: 2021-12-27
The Catcher in the Rye seems to be one of “those” books that is on all of the typical reading lists: high school must-reads, timeless classics, cultural icons. The tale of Holden Caulfield is familiar to most because of the novel’s notoriety: the troubled youth who finds himself expelled from (yet another) school and spends a few days gallivanting around New York City before fessing up to his parents. Even if you haven’t read the story, you’ve heard of it. The novel’s controversial themes of a teenage boy using strong language and encountering risqué characters (read as: prostitute) made it the focus of scorn among parents and placed the book on yet another popular list: the banned books.

Contrary to what seems to be popular opinion, I did not find Holden unlikeable or even hateable. I don’t think the key takeaway from any novel should be whether or not you like the protagonist. And I don’t think that the reader of The Catcher in the Rye is supposed to decide whether Holden behaved well and should be his or her friend by the end of the book. Novels should not be dismissed because a protagonist has a series of flaws. In many cases, those flaws are what create the central conflict or are what the author is trying to draw our attention to in order to make a point.

So what point is Salinger making in The Catcher in the Rye? I contend that there is much more to Holden and that Salinger engineered Holden to act and speak the way he did with intention.

Holden speaks as if he has been through more than just typical teenage angst. We’re led to think that he’s a troublemaker who distances himself from others. He’s on his third or fourth school (he keeps getting kicked out or failing out), and as the novel opens, he has just failed out of his latest school. So the reader’s initial reaction may be to dismiss him as a kid who doesn’t want to apply himself (as his former teacher, Mr Antolini, later implies). But have you stopped to consider exactly what could cause teenager to go through what he has with school? Or why he would be so rough and judgmental with his peers? Holden is clearly unable to relate with anyone his age. He can’t seem to fit in, and he can’t seem to form any lasting connections with anyone. He talks like an adult and feels as if he is above his peers or simply can’t relate to them. But when he is around adults, he is equally lost and can’t relate or express himself effectively.

Holden’s story is that of an adolescent, but one that is compounded with the concept of what it is like to grow up after suffering trauma and loss. Holden is clearly not over the death of his brother (he still talks to him from time to time). He also insinuates at one point, quite subtly, that he has been the victim of sexual molestation in the past (when Mr. Antolini is petting him on the head while he sleeps, Holden wakes up and runs from the apartment, saying that whenever adults do that he feels weird, and it’s happened at least several times before).

Holden’s explanation of what he thinks the catcher in the rye really is was quite touching. While his sister corrects him (he has the lines of the song wrong), he tells her what the lyrics meant to him the way he thought they went. As the catcher in the rye, he would be able to catch, or save, the other children in the rye from jumping over a cliff. Holden didn’t have anyone to catch him when it felt like his life was going over time after time. The fact that he wants to try to save other kids from feeling like he did is touching. Throughout the book, he talks about how innocent kids are, especially his sister, and you get the sense that he does not have that innocence but wishes he had been able to hang onto it longer than he did.

What was this book even about. Only reason i bought was because of the cover, guess this teaches not to judge a book by its cover if it has a nice cover.