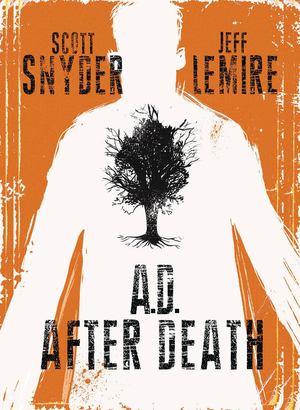 Scott Snyder
What if we found a cure for death? Two of comics' most acclaimed creators, SCOTT SNYDER(WYTCHES, Batman, American Vampire) and JEFF LEMIRE(DESCENDER, PLUTONA, Moon Knight, Sweet Tooth) unite to create anepic like no other, set in a future where a genetic cure for death has beenfound. Years after the discovery, one man starts to question everything, leadinghim on a mind-bending journey that will bring him face-to-face with his past andhis own mortality. A unique combination of comics, prose, and illustration, A.D.: AFTERDEATH is an oversized hardcover graphic novel written by SNYDER andfully painted by LEMIRE. Trim Size -- 8.375" x 10.1875" Collects AD: AFTER DEATH #1-3.

@ruthsic
Reviewed: 2018-01-25
A.D. is a speculative fiction about a world in which death has been cured. Told through the POV of a man who keeps questioning the existence of a world below the one they live in, it follows a non-linear timeline that constantly switches back and forth between three timelines - his childhood, when the cure was created, and the now (some 800 years later). The canon takes some time to settle into place, which is why I spent most of the first half of the book confused as to what fit in where and how the world worked. Things make sense as we head over to the finale, and then the central theme of the story is revealed.

A.D. plays off the notion that the ultimate triumph for humans would not be over death, but their own fear of death. The main character outlines his life as it leads to this moment, and though some of those events don't seem relevant at that point, it shapes him. Similarly, a lot of our life experiences shape our choices, and the memory of those experiences makes us who we are. Without that memory, we are without context - which is what happens to our main character. Though he keeps records of his life through the 800+ years of immortality, that 'memory' is selective and builds up much of his character.

The story is told partway like an illustrated book (especially the past, childhood parts) and partway like a graphic novel (the recent parts). The former involves a lot of prose and provides much of the backstory and characterization, but the latter also builds the same through some cleverly done scenes. Speaking of artwork, I was not a fan of the lineart - it comes off as very shabby, but the coloring is where this book shines. Beautifully colored in watercolor style, and rendered in dramatic tones, it serves the story very well, and makes me almost excuse the terrible lineart.

The speculative portion of the book also makes sense on a scientific level - there were some concepts and discoveries I wasn't aware of, and finding them out intrigued me. In a way, this might very well be possible, but whether the world would be the same if such a thing happened seems unlikely. There is also a logistical question of the world after - how is a self-sustaining town of people existing without being affected by the world below? Also they are not as futuristic as I would expect from a world that has been through 8 centuries of technological progress.

Overall, though, it an interesting bit of an existential question, wrapped in a world where it was possible. The book is definitely an interesting read.

Received an advance reader copy in exchange for a fair review from Image Comics, via Edelweiss.
Item Posts
No posts
© 2020 libib.com / All rights reserved