Book of Strange New Things: A Novel, The 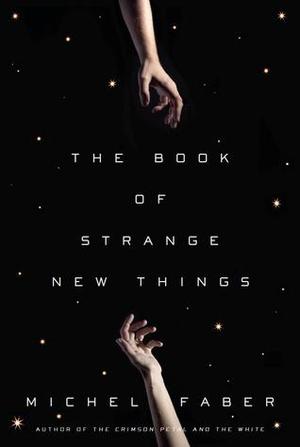 Michel Faber
A monumental, genre-defying novel over ten years in the making, Michel Faber’s The Book of Strange New Things is a masterwork from a writer in full command of his many talents. It begins with Peter, a devoted man of faith, as he is called to the mission of a lifetime, one that takes him galaxies away from his wife, Bea. Peter becomes immersed in the mysteries of an astonishing new environment, overseen by an enigmatic corporation known only as USIC.   His work introduces him to a seemingly friendly native population struggling with a dangerous illness and hungry for Peter’s teachings—his Bible is their “book of strange new things.” But Peter is rattled when Bea’s letters from home become increasingly desperate: typhoons and earthquakes are devastating whole countries, and governments are crumbling.  Bea’s faith, once the guiding light of their lives, begins to falter.   Suddenly, a separation measured by an otherworldly distance, and defined both by one newly discovered world and another in a state of collapse, is threatened by an ever-widening gulf that is much less quantifiable.  While Peter is reconciling the needs of his congregation with the desires of his strange employer, Bea is struggling for survival.  Their trials lay bare a profound meditation on faith, love tested beyond endurance, and our responsibility to those closest to us. Marked by the same bravura storytelling and precise language that made The Crimson Petal and the White such an international success, The Book of Strange New Things is extraordinary, mesmerizing, and replete with emotional complexity and genuine pathos.

@amcorbin
Reviewed: 2021-05-24
The scifi bits were interesting and strange. The characters were sometimes frustrating, and not in an enjoyable. More of a "I'm reading this in spite of the main character who I have to spend 100% of the pages with." But that's my fault. The author couldn't know that self-involved men who look at women only in terms of their attractiveness (well, almost: also how Saved they are) are the most boring thing in the world.

Don't get me wrong -- if this book had been bad I would have stopped reading. But I read every page, even though I knew the ending was going to fizzle rather than boom, because it's litfic scifi. It's not a rip-roaring adventure, but mostly a slow burn about the interior lives of characters you may or may not like by the end.

Because it's litficcy, the book does have a lot of larger more writerly things happening -- references that are easy to miss in the structure and plot, and I'm sure I missed most of them; those slow-burning characters; ultimately being about the difficulty of maintaining a relationship, and everything else from the aliens to the space travel to the disasters back on earth is only there to serve that purpose.

Look. That's fine. I'm way happier reading a book about The Human Condition if it involves weird fetus-faced aliens. But I've seen it done a hell of a lot better. But since most of the time I was rooting a little bit for the main character to be vivisected in a fatal misunderstanding (of Biblical themes in this case), a la Speaker for the Dead, the plodding exploration and internal development only led to disappointment.

The brightest moment in the whole book was when Peter finally found and met Tartaglione, which only lasted about five pages and had very little in the way of repercussions. Bummer.

Conclusion: Could've been a lot shorter.
@literallymya
Reviewed: 2019-01-14
Really interesting reading experience here. I found the main character at best annoying and at worst reprehensible. Plus a cat dies and that was particularly awful to read BUT it was definitely well written and interesting at times, enough for me to finish the 500 page novel.
@cpalo
Reviewed: 2015-08-19

Perhaps my error was in hoping this book would be like Mary Doria Russell's _The Sparrow_.  Of course it wasn't—it couldn't be, and that was an unfair standard to hold it to. Nonetheless, I was rather disappointed in this novel.  In the dual plotlines (Peter's on the planet, told in 3rd person and his wife Bea's on earth told through her letters to him) both accelerated to the denoument unexpectedly and did not so much wrap up as simply finish.  This sense of simply finishing was satisfying in The Crimson Petal and the White, but in The Book of Strange New things the plot and character development was to thin to support an ending and abrupt ending.  I was intrigued by the paired dynamic of bodily harm/bodily healing in the two plots--but again, found these to be  suddenly introduced and not sufficiently woven throughout the book to offer that sense of pieces falling together when the narrative reveals the crux of the crisis in the plot.