First Rule of Punk, The 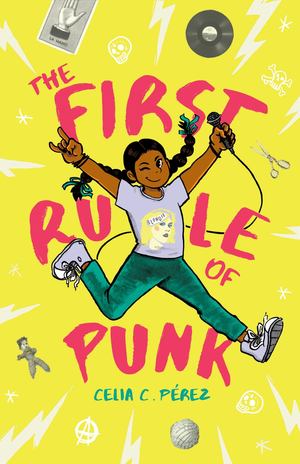 Celia C. Pérez
From debut author and longtime zine-maker Celia C. P#65533;rez, The First Rule of Punk is a wry and heartfelt exploration of friendship, finding your place, and learning to rock out like no one's watching.  There are no shortcuts to surviving your first day at a new school--you can't fix it with duct tape like you would your Chuck Taylors. On Day One, twelve-year-old Mal#65533; (Mar#65533;a Luisa, if you want to annoy her) inadvertently upsets Posada Middle School's queen bee, violates the school's dress code with her punk rock look, and disappoints her college-professor mom in the process. Her dad, who now lives a thousand miles away, says things will get better as long as she remembers the first rule of punk: be yourself.   The real Mal#65533; loves rock music, skateboarding, zines, and Soyrizo (hold the cilantro, please). And when she assembles a group of like-minded misfits at school and starts a band, Mal#65533; finally begins to feel at home. She'll do anything to preserve this, which includes standing up to an anti-punk school administration to fight for her right to express herself! Black and white illustrations and collage art throughout make The First Rule of Punk a perfect pick for fans of books like Roller Girl and online magazines like Rookie.