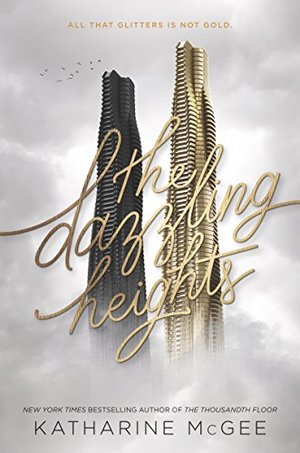 Katharine McGee
The sequel to the New York Times bestselling novel The Thousandth FloorNew York, 2118. Manhattan is home to a thousand-story supertower, a breathtaking marvel that touches the sky. But amidst high-tech luxury and futuristic glamour, five teenagers are keeping dangerous secrets…LEDA is haunted by memories of what happened on the worst night of her life. She’ll do anything to make sure the truth stays hidden—even if it means trusting her enemy. WATT just wants to put everything behind him…until Leda forces him to start hacking again. Will he do what it takes to be free of her for good?When RYLIN wins a scholarship to an upper-floor school, her life transforms overnight. But being there means seeing the boy whose heart she broke, and who broke hers in return.AVERY is tormented by her love for the one person in the world she can never have. She’s desperate to be with him… no matter the cost. And then there’s CALLIOPE, the mysterious, bohemian beauty who arrives in New York, determined to cause a stir. And she knows exactly where to begin. But unbeknownst to them all, someone is watching their every move, someone with revenge in mind. And in a world of such dazzling heights, just one wrong step can mean a devastating fall.The sumptuous second book in the bestselling Thousandth Floor series has all the drama, romance and hidden secrets that landed the first book in this series at #2 on the New York Times bestseller list.

@ruthsic
Reviewed: 2018-01-25
Warning: spoilers for The Thousandth Floor might come up in this review.

You know what? the magic of The Thousandth Floor which had me enamoured enough to give it a 4 star, has faded! I liked that one more for the rosy picture it painted of a technologically advanced future, but still with some realistic teenage issues. This book was, on the other hand, simply put, a mess. Now, The Thousandth Floor (TTF) had ended with an accidental murder (I will call it murder, damn it, since she tried to cover it up) and the blurb for this one went something along the lines of 'guilt! secrets! blackmail! revenge!' and I geared myself up for a PLL-esque plot. Cliche, I know, but a comforting cliche. Especially when this series is just a futuristic Gossip Girl on crack. (I'm sorry I was blinded by the tech-filled future in TTF and wholly ignored this fact)

A thing which I did not particularly care for in TTF was Avery and Atlas. They are both so generic and boring and the incest plot is frankly disturbing. (No, I don't care that they are not related by blood - they were brought up as siblings and that makes it incest in my eyes, okay?) I don't know why or how McGee thought that incest was the Next Hot Thing, but I could swear half of this book is Avery pining and hooking up with Atlas - which and honestly made me go - 'Girl, your best friend died! Shed a tear or two maybe?' Honestly, Leda had much more of a reaction to that death, (I mean, obviously, still...) and she got a decent character arc in this book, which was a step up from her 'stalker-ex' arc in the earlier book. Her 'blackmail-everyone' arc isn't morally better, but was easier to digest because she at least shows some remorse and grief over the fact.

If you were hoping for a revenge arc like me, you are bound to be disappointed, dear reader-of-my-review, because Mariel doesn't appear for a a huge portion of the book. There are barely any stakes in the book - nearly everyone is carrying on with pretty much the same life as before. We have a slightly interesting character in Calliope, but even she let me down, because the blurb promised something and the book did not deliver dammit! (his is why you don't exaggerate stuff in blurbs to heighten anticipation, btw). A large portion of the story still revolved around teenage hook-ups (yawn), and everyone kissing everyone (it gets fairly repetitive at some point). And you know what enraged me more -all the couples/hook-ups were allocishets! I feel like Eris was made the Token LGBT character and then killed off for shock value, and I won't even go into how much that irked me the second time around.

Going back to the technical aspects, the writing is still pretty good and the world-building interesting, I agree. But those are first-novel aspects I value - in sequels I judge more harshly on other things like characterization and this one could not satisfy me. No amount of 'look holographic waterfalls' could distract me from how shallow the plot of the book turned out to be.