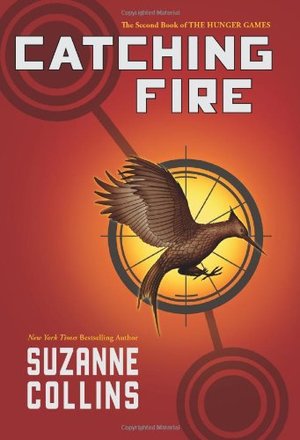 In the sequel to the hugely popular The Hunger Games (2008), Katniss Everdeen and Peeta Mellark, having won the annual Games, are now rich and famous--and trapped in the fiction that they are lovers. They are seen as a threat to the Capitol, their unusual manner of winning an act of rebellion that could inspire uprisings throughout Panem. Knowing her life is in danger, Katniss considers escaping with her family and friends but instead reluctantly assumes the role of a rebel, almost forced into it by threats from the insidious President Snow. Beyond the expert world building, the acute social commentary and the large cast of fully realized characters, there's action, intrigue, romance and some amount of hope in a story readers will find completely engrossing. Collins weaves in enough background for this novel to stand alone, but it will be a far richer experience for those who have read the first installment and come to love Katniss, Peeta, Haymitch and the rest of the desperate residents of this dystopia. A humdinger of a cliffhanger will leave readers clamoring for volume three. (Science fiction. 12 & up)

Publishers Weekly (June 22, 2009) Fresh from their improbable victory in the annual Hunger Games, Katniss and Peeta get to enjoy the spoils only briefly before they must partake in a Capitol-sponsored victory tour. But trouble is brewing-President Snow tells Katniss directly he won't stand for being outsmarted, and she overhears rumbles of uprisings in Panem's districts. Before long it's time for the next round of games, and because it's the 75th anniversary of the competition, something out of the ordinary is in order. If this second installment spends too much time recapping events from book one, it doesn't disappoint when it segues into the pulse-pounding action readers have come to expect. Characters from the previous volume reappear to good effect: Katniss's stylist, Cinna, proves he's about more than fashion; Haymitch becomes more dimensional. But the star remains Katniss, whose bravery, honesty and wry cynicism carry the narrative. (About her staff of beauticians she quips: "They never get up before noon unless there's some sort of national emergency, like my leg hair.") Collins has also created an exquisitely tense romantic triangle for her heroine. Forget Edward and Jacob: by book's end (and it's a cliffhanger), readers will be picking sides-Peeta or Gale? Ages 12-up. (Sept.) Copyright 2009 Reed Business Information. School Library Journal (September 1, 2009) Gr 7 Up-Every year in Panem, the dystopic nation that exists where the U.S. used to be, the Capitol holds a televised tournament in which two teen "tributes" from each of the surrounding districts fight a gruesome battle to the death. In The Hunger Games (Scholastic, 2008), Katniss Everdeen and Peeta Mellark, the tributes from impoverished District Twelve, thwarted the Gamemakers, forcing them to let both teens survive. In this rabidly anticipated sequel, Katniss, again the narrator, returns home to find herself more the center of attention than ever. The sinister President Snow surprises her with a visit, and Katniss's fear when Snow meets with her alone is both palpable and justified. Catching Fire is divided into three parts: Katniss and Peeta's mandatory Victory Tour through the districts, preparations for the 75th Annual Hunger Games, and a truncated version of the Games themselves. Slower paced than its predecessor, this sequel explores the nation of Panem: its power structure, rumors of a secret district, and a spreading rebellion, ignited by Katniss and Peeta's subversive victory. Katniss also deepens as a character. Though initially bewildered by the attention paid to her, she comes almost to embrace her status as the rebels' symbolic leader. Though more of the story takes place outside the arena than within, this sequel has enough action to please Hunger Games fans and leaves enough questions tantalizingly unanswered for readers to be desperate for the next installment.-Megan Honig, New York Public Library Copyright 2009 Reed Business Information.
@virago
Reviewed: 2021-10-12
Holy crap this is so good. So many things going on at once. Poor Katniss trying to save everyone, to no avail. That trick with the Quell was so unexpected, but it makes sense for the President to do it. Rebellion. Poor Peeta and Katniss trying to protect each other. And then there's Gale, who I've been pulling for all along. Who will survive? How will this rebellion play out? I'm gonna end up starting the next book as soon as I'm done this review!
@jgannarelli
Reviewed: 2021-07-22
4
@1stcactus
Reviewed: 2021-04-10
Second in The Hunger Games series. Continuing story of Katniss & her rebellion against the government
@mella87
Reviewed: 2021-03-06
Even better than the first!! Loved it.
@ddeluna1
Reviewed: 2021-02-09
4
@hawkeye1316
Reviewed: 2021-02-05
What an amazing read! From start to finish, there is so much tension wondering how President Snow was going to respond to Katniss' rebellion. Both his response and the aftermath were exciting to read. I am very happy with this series so far and can't wait to start the last one.
@kirbyb
Reviewed: 2021-02-04
4.29
@jennyuen
Reviewed: 2020-11-07
I wish we could give half stars because although I enjoyed this book, it doesn't measure up to the first one. It was still compelling and I couldn't put it down, but the plot was basically the same as the first book. It started off slow and by the time the action started, it felt rushed, as if the author knew she was telling the same story again.
@nystel
Reviewed: 2020-08-17