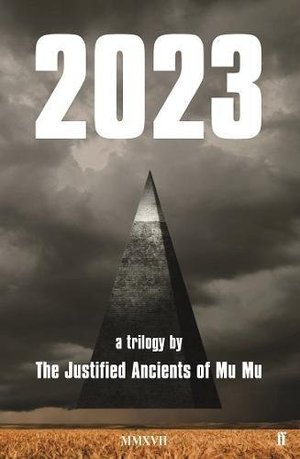 The Justified Ancients of Mu Mu
In the Spring of 2013, the undertakers Cauty & Drummond were on a tour of the Western Isles of Scotland. It was while staying at Jura's one hotel that they came across a strange-looking book. The book was titled Back in the USSR and authored by someone using the name of Gimpo. Back in the USSR was the memoir of a young woman who had been a nurse in the Falklands War in 1982. Gimpo ended up in Kiev in what was then the Soviet state of The Ukraine. Here she met with two women named Tat'jana and Kristina who went under numerous aliases, the most widely used being The KLF. Also in Back in the USSR it was claimed that Tat'jana and Kristina had been heavily influenced by a book originally written in English as The Twenty Twenty-Three! Trilogy by someone calling themselves George Orwell. But this George Orwell was in turn the pen name of Roberta Antonia Wilson.