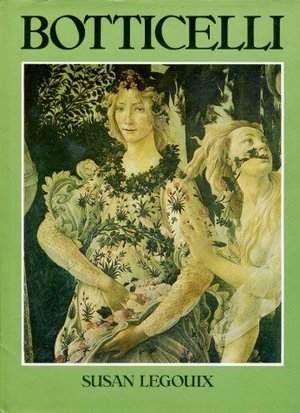 Susan Legouix
Botticelli’s art has proved more magnetic to historians and critics during the past hundred years than that of any other fifteenth century painter. His linear evocations of feminine grace and beauty, epitomized in his celebrated allegorical compositions ‘Primavera’ and ‘The Birth of Venus’, have entered the repertory of potent and immediately recognizable images, representing the classical ideal of the Italian Renaissance. His celestially serene Madonnas and sweet-tempered angels have become inseparable from the notion of religious sublimity and devotion in the quattrocento. Susan Legouix offers a fresh and stimulating account of the art and the world of Botticelli. She charts the development of Botticelli’s style, his growing assurance and his ultimate adoption of an almost backward-looking, Gothic but deeply personal idiom. The demands of his public commissions for churches and their effect upon his style are measured and balanced against his private modes, especially his illustrations for Dante’s Divine Comedy, which confirm his genius as a draughtsman and an interpreter. Special attention is also paid to the shifting taste of succeeding centuries and the Victorian revival of interest in Botticelli’s work which has raised him to the position of one of the supreme if also most enigmatic masters of western art.