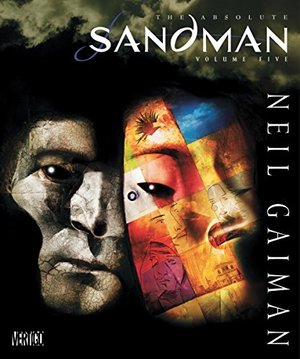 Neil Gaiman, Yoshitaka Amano, P. Craig Russell, Dave McKean
THE ABSOLUTE SANDMAN BOOK FIVE is the latest oversized deluxe slipcased hardcover collecting the classic Sandman stories written by Neil GaimanTHE SANDMAN: ENDLESS NIGHTS reveals the legend of The Endless, a family of magical and mythical beings who exist and interact in the real world. Born at the beginning of time, Destiny, Death, Dream, Desire, Despair, Delirium and Destruction are seven brothers and sisters. These seven peculiar and powerful siblings each reveal more about their true being as they star in their own tales of curiosity and wonder.THE SANDMAN: THE DREAM HUNTERS appears in two versions here: First, as a prose novella by Gaiman with illustrations by Yoshitaka Amano, and then in a comics version adapted by Gaiman’s frequent collaborator P. Craig Russell (THE SANDMAN, FABLES: THE LAST CASTLE). In this tale, a humble young monk and a magical, shape-changing fox find themselves romantically drawn together. As their love blooms, the fox learns of a devilish plot by a group of demons and a Japanese emperor to steal the monk’s life. With the aid of Morpheus, the fox must use all her cunning to foil this evil scheme and save the man that she loves.