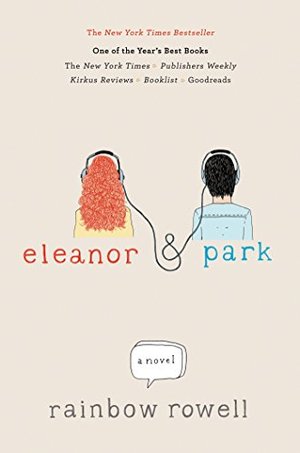 This book is just lovely, sweet and heartbreaking. And it is clear from the beautiful fan art present on-line that this book has touched many a heart.

See updates below for a visual journey of this story.
@atroskity
Reviewed: 2018-01-03
Eleanor & Park is a love story set in the 80۪s. If it didn۪t already have that going against it, it۪s a star-crossed affair between two teenage outsiders, so it seems like it should just be the worst kind of clich̩d teenage drivel, but it isn۪t. Unlike the usual outsider۝ protagonists I۪ve run across in YA romances- the ones who are actually super attractive and cookie-cutter but just don۪t know it despite being constantly reminded- Eleanor and Park feel genuinely outside the place they۪ve been forced to inhabit, like the only place they truly belong is with each other. Which I guess is really what young love is all about- finding that place where you really fit, even if that place is a person.

This book was devastating, but not for the reasons I would have anticipated. Maybe I۪m too cynical, maybe I۪ve read one too many doomed young love stories, but it wasn۪t the romance or its inevitable fallout that crushed me. I did find it believable and sad and beautiful in all of its teenage messiness and intensity, but it was the reality of Eleanor۪s family that had me tied up in knots.

I had a stepfather with whom I did not get along. He wasn۪t abusive, per se, and he came from his own traumatized childhood, but to some degree I can empathize with Eleanor on a level that goes beyond the surface. My step dad was very judgmental, since I was everything he would have never wanted in a child of his own. Instead of being an athletic, outdoorsy country kid, I was a bookish wallflower who avoided kids my own age. And like any kid with a step parent, at some point I felt that my mom had chosen him over me, knowing how little we could get along. His opinions were vocal, and when he must have thought he was being funny, he was actually tearing my self-worth apart, not to mention he was incredibly strict. A lot of what he had to say was internalized, which I guess is typical of thin-skinned teenagers who are already struggling with identity. (On a side note, we reconciled somewhat as we both got older and learned to make adjustments for each other). But back then I felt afraid, like walking in the living room was walking into a minefield. So take this, and multiply it many times and you have Eleanor۪s putrid stepfather, Ricky.

Eleanor has her newness, her poverty, her wild red hair, and her size already working against her when she arrives on the school bus one morning, and the popular kids are quick to go for the jugular as soon as possible- she is soon christened Big Red. But their treatment is nothing, really, compared to the soul-sucking hell that is her home life. Some reviewers have speculated about (or rather, expressed exasperation with) Eleanor۪s passivity in the face of the torment she receives at school, but I think these people just don۪t get it. High school bullies are a dime a dozen, but when you have Satan as a step-father, you learn to keep your head down; not rocking the boat would be a life-saving imperative for someone in Eleanor۪s situation, and that kind of passivity doesn۪t just go away when you walk out the door in the morning. For reasons not initially disclosed, Eleanor has been living apart from her family and at the start of the novel is just moving back in, forcing her to completely relearn her own family dynamic. Her mother is worn down and desperate to keep things together, and her siblings can۪t quite figure out where their allegiances lie. Ricky is a beer-swilling white trash asshole, a ticking time bomb of alcoholic rage- and possibly something even more sinister. Eleanor۪s position in the household always feels temporary; she can be discarded whenever Ricky damn well pleases, because her mother is too afraid (and frankly, too stupid) to do anything about it. (Seriously, at one point Ricky screams at the kids I could get rid of all of you!۝ Who would let a man like that within 500 feet of their children?)

Park, on the other hand, has advantages Eleanor can only dream about. He۪s not a popular kid, but he has his own place in the general hierarchy, and his family is, if not perfect, at least averagely dysfunctional. His parents are sappily in love, even after years of marriage, and he has just about all of the material goods a teenager could want. But as a half-Korean kid in whitewashed Husker country and the smaller, more delicate son (compared to his father and brother), he still feels himself to be an outsider.

His first impressions of Eleanor are about as far away from love at first sight as possible, and hers aren۪t much in his favor either. Forced to share a bus seat by the territoriality of small town teenagers, they barely stand each other at first. Of course, this gives way to tolerance, to friendship, and eventually to that particular brand of intense love that only teenagers desperate for acceptance are capable of. They don۪t speak much at first; their attraction builds as they share the things they love with each other, starting with Park۪s comic books. I would be lying if I said falling in love over the original issues of Watchmen isn۪t kind of dreamy, because it is. Comics, music, and books soon become romantic currency between them, as they share more and more of each other and build their universe of two.

Since we all know the course of true love never did run smooth, especially in YA, there are difficulties beyond the schoolyard. Eleanor۪s stepdad would send her away (again) if he knew about Park, and her mother is just as culpable in keeping them apart, since anything that would remotely rock the boat is strictly forbidden. Park۪s family, though initially skeptical (especially his mother), accept Eleanor and their time together at his house becomes a respite that just can۪t last; small towns have big mouths.

I won۪t go any further into the specifics of their relationship, or the tipping point in the narrative, to save on spoilers, but just a bit more on the family issue. I was on edge through this story, hoping not only that Eleanor and Park would find a way to be together, but that Eleanor and her siblings would get out of that horrible house- with or without their pathetic mother. I know I should be more sympathetic- battered women are not asking for it۝ or any other victim-blaming nonsense- but it couldn۪t be more obvious that Ricky had to have been clearly bad news from the earliest days. When your boyfriend forces one of your children out of your home, you don۪t marry him. You just DON۪T. So I struggled with finding sympathy for Eleanor۪s mom, but I felt torn up inside thinking about her brothers and sister. There have been complaints about the open-ended nature of the romance; I thought it was realistically handled, but I really could have used closure for her family situation.

I have really dragged this one out, but I think the point I۪m trying to make is that this is some really top-notch stuff. Not just for YA, but in general. Rather than just being generic star-crossed relationship drama, it has depth throughout and makes us (or at least me) care about all of the people involved, not just the eponymous leads. I۪m looking forward to reading more of Rowell in the future.

Initial Impressions:AHHH the ending!!!
I honestly didn't think I was going to fall in love with this book, so hats off to Rainbow Rowell because I DID. It was rather different from what I expected but in an amazing way. Highly recommended!!

Review originally posted on The Book Addict's Guide: Simply put: I loved ELEANOR & PARK and I totally didn’t see it coming. I was definitely enjoying the book the whole time – Don’t get me wrong there – but I did not expect to fall in love with it. Based on everything I had seen, I was expecting ELEANOR & PARK to be a cute, upbeat love story with a strong musical connection. Obviously the music tie-in was still there, but E&P is definitely a lot deeper than I originally thought.

Eleanor has a troubled home life. Her mom and dad are separated and after her step-dad Richie kicked her out last year, our story begins with Eleanor returning home to live in a cramped house with her mother and 4 siblings. Park has a great family in his parents, brother, and grandparents who live next-door, but he still doesn’t quite fit in. He’s one step away from being the focus of the bully’s attention at school with his soft, Korean features and obvious different tastes in music (punk) and reading (comics).

The best part about ELEANOR & PARK is how naturally the two incredibly different characters fell together and fit so perfectly. It all started one day on the bus and from there, Rainbow Rowell takes the reader on an extremely moving journey to bring the characters together and really form a strong bond between the two. Yes, there were times when I was frustrated with the characters, but that’s just a natural progression of a story and well… high school.

What really pulled me in was Eleanor’s story line and how truly difficult her home life was. She was an outcast in her own home, never allowed to act naturally and sometimes I found myself questioning, what even is acting naturally for Eleanor? Her step-dad is an absolute terror, her mom does nothing about it, and Eleanor has to try to keep an eye on the little kids while still trying to hold all the pieces of her life together. My heart just went out to her!! And I felt slightly murderous towards her step-father.