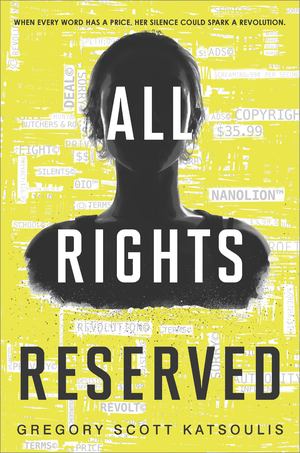 Gregory Scott Katsoulis
Speth Jime is anxious to deliver her Last Day speech and celebrate her transition into adulthood. The moment she turns fifteen, Speth must pay for every word she speaks ("Sorry" is a flat ten dollars and a legal admission of guilt), for every nod ($0.99/sec), for every scream ($0.99/sec) and even every gesture of affection. She's been raised to know the consequences of falling into debt, and can't begin to imagine the pain of having her eyes shocked for speaking words that she's unable to afford. But when Speth's friend Beecher commits suicide rather than work off his family's crippling debt, she can't express her shock and dismay without breaking her Last Day contract and sending her family into Collection. Backed into a corner, Speth finds a loophole: rather than read her speech--rather than say anything at all--she closes her mouth and vows never to speak again. Speth's unexpected defiance of tradition sparks a media frenzy, inspiring others to follow in her footsteps, and threatens to destroy her, her family and the entire city around them.

I had been so eager to read this book ever since I first heard about it, so I am really sad to say that I did not enjoy it. The concept for the plot is very interesting and there were many aspects of this novel that were quite creative. However, the negatives severely outweighed the positives in this case. There was so much potential here for a riveting and powerful story about freedom of speech, and the subject itself is very topical in our world today. But what could have been both exciting and enlightening was ruined by too many tropes and an extremely unlikeable main character.

This novel takes place in a dystopian future, reminiscent of settings like Orwell’s 1984 and The Hunger Games trilogy. This society brings new meaning to the term free speech. Every single word and gesture is copyrighted or trademarked and there are few things a person can do that do not cost them money. In this story, we follow a young girl named Speth who is about to reach the age at which this system of payment for communication applies to her. When she witnesses the tragic death of her friend right before her “Last Day” speech, she is overcome with sadness at the unfair and restrictive situation they have all been forced into. So instead of reading her speech, she vows to never speak again, inadvertently starting a dangerous but crucial revolution.

I really did not like this book. Though there were some unique parts, much of it felt like a copy of other dystopian young adult novels, relying on far too many overused tropes. My number one problem was the main character, Speth. She is by far one of the most infuriating characters I have ever come across and as this is written in first person, there is no escaping her. Her actions throughout the story are consistently enraging, causing tons of unnecessary pain to everyone around her. She could have been a strong heroine, standing up for what she believes in and fighting for free speech. However, almost everything she does is highly irresponsible, not well thought-out, and is more damaging to society rather than helpful.

Though she does end up inspiring people within her society to fight for their rights, Speth herself does not even seem to actually know what she is fighting for exactly. As the plot intends, her initial refusal to speak inadvertently starts a bit of a revolution. This choice comes from the deep grief she feels in the moment, and that is completely understandable. But as the story progresses, she comes across as increasingly immature and she does not grow at all.

Standing up for what you believe in can be an extremely daunting task and requires a huge amount of courage and strength. But Speth is stubborn in the wrong way and she constantly fails to see how much she is hurting innocent people who are close to her. This calls into question the plausibility of so many people following and looking up to her.

Most of the other characters in the novel are far more likable than Speth and I thought Katsoulis did a very good job creating them. They are definitely multi-dimensional and it is interesting to learn their backstories and get a picture of how they live in this bleak societal state. Since Speth does not speak to anyone during the narrative, it is hard to get a handle on her relationships with the other characters, but for the most part, the characterization of the side characters is a decently strong aspect of the book.

Another aspect of the novel that I quite liked was the creativity of the different corporations that run every part of society. Katsoulis comes up with some very clever and sometimes hilarious ideas for these companies and the advertisements they put forth. There is this sort of dark comedy feel here due to the mixture of humor with a frighteningly realistic dystopian world. I particularly liked the concept of the placers, and I actually wish there had been even more of a focus on them.

I think the main problem here does not stem only from Speth’s recklessness and lack of consideration for other people and their wishes but also from the way the story is approached. It is clear that Katsoulis wanted this to be an action-filled narrative that shocks the reader with its many twists and turns. However, he just goes way too far. Rather than add to the strength of the underlying message of the story, these twists only become a massive detriment to Speth’s character. These events also serve to make the story less and less believable as they transpire. There was one situation in about the final quarter of the narrative that was the final straw for me and there was no redeeming itself after that.

I think the basic concept here is pretty solid and I definitely do see what Katsoulis is going for. Unfortunately, the execution was rough and, in my opinion, did not produce the desired effect. The positive message of championing freedom of speech is mostly lost due to the lack of a strong main character. Katsoulis also throws in too many events that take place purely for shock value and feel somewhat pointless within the actual narrative as a whole. I do intend to read the next book in the series to see if any of the issues I found in this one are fixed.

@ruthsic
Reviewed: 2018-01-25
All Rights Reserved is a speculative fiction about a future where litigation and copyrights have been taken to the extreme, so as to effectively abolish 'free' speech. With the exception of a few expressions, every form of communication or word has been copyrighted, or trademarked and the use of every single thing has been patented in such a way that just existing means you have to pay a price. Hugging someone? You need to pay! Talking to someone? You need to pay per word or phrase! In such a world, Speth (whose very name was picked because it costs less) decides to take an impulsive vow of silence when she comes of age at 15. Her silence is so complete that she does not speak or communicate beyond what is considered 'public domain' in her world.

The world-building of All Rights Reserved, while confusing at the start, slowly develops throughout the course of the novel, and pulls you in an immersive experience. The handful of times I put the book down for a break, I couldn't shake off the feeling that my every action had a price. It makes you question how much freedom we take for granted, and how if we aren't careful we could head towards a world like it. It is speculative, and a bit exaggerated, sure, but also seems plausible, if you think about it. The author, through Speth, brings up the challenges of living in a world without communication, of having to restrict all your thoughts to yourself and never being able to convey anything. Throughout the book, she is offered alternative means of communication that wouldn't break the laws of her world, but she holds her 'silence' as a form of protest and as a matter of principle.

Besides the specific confines of the world, it also builds on the rich-poor divide, and how capitalism is skewed towards the former. This is a world that is built on profiting from the use of things and intellectual property, and it questions how many rights we would sign away in the name of progress. It is however, confined to a city and the scope of the world outside the city is only hinted at, which is why I surmise it is a series. Without going into specifics, I would like to say that I loved her team - they were the cutest thing when they were introduced and I loved how their friendship built up, (also, that profession is simultaneously hilarious and badass) and I also loved the family dynamics of the Jimes. The pacing is a bit slow, and it takes some time for things to really get into gear, though. The villain was a bit one-dimensional, considering I was thinking it was a systemic issue, but I would like to see what the next book contains in terms of obstacles.

This was an interesting speculative dystopia, imaginative and rendered in an engaging manner. Would recommend it for all science fiction fans, specifically.