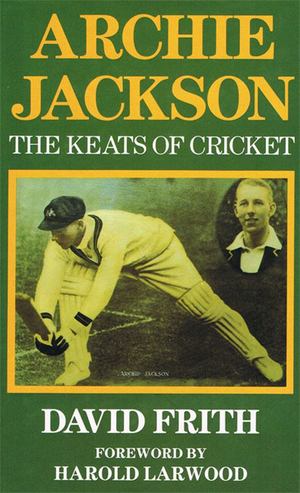 David Frith
The new edition of David Frith's admirable biography of Australia's tragically short-lived batting prodigy, which was first published in a limited edition in 1974 and a collector's item ever since. A contemporary of Bradman, the Scottish-born Jackson made his first-class debut for New South Wales at the age of seventeen, and his arrival on the Test scene in 1929 eclipsed even Bradman's when the tall, willowy nineteen-year-old scored 164 elegant runs against England on his Test debut. The artistry and classical perfection of his batmanship enchanted purists and partisans alike, and Jackson seemed set for cricketing immortality when lingering poor health turned into pulmonary tuberculosis. In 1933, in the middle of the following, acrimonious England tour, Archie Jackson's death cast a shadow over the whole cricketing world. David Frith recounts the glorious events of Jackson's all too brief career as Australia's biggest young star and writes simply but movingly about his desperate fight against his disease, about the love affair which sustained him during his illness - culminating in betrothal just a week before he died - and the emotional scenes as Jackson's body was taken home. This is a masterly account of the briefest, saddest and most tantalising of great cricketing lives.